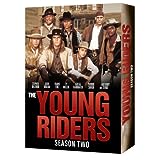 The treats in TGG Direct's DVD release of the 1990 - 91 second of the three seasons of the ABC western "The Young Riders" extend beyond the gift box that houses it to include seeing performances by stars Stephen Baldwin and Josh Brolin early in their careers and getting a taste of the quasi-realistic western shows and films from that era that followed the popular "Lonesome Dove" mini-series.

The bad news regarding this release is that clearance issues regarding the season premiere and four other episodes restrict the set to 17 of the 21 episodes from this season. The good news is the included episodes have plenty of action, adventure, and charming interaction among the "Young" studs to help forget the short days, cold weather, and frequent storms that are plaguing much of the country.

A bit of TV history related to "Riders" is that ABC faced a legal challenge regarding the name of this series being very similar to a 1988 film titled "Young Guns." Complete candor requires confessing that a 20-year old memory resulted in initially thinking that that series is based on that film.

The premise of "Riders" is that our boys (and girl) in buckskin are riders for the Pony Express, which delivered mail in rural areas from 1860 -61. This group includes younger and fictionalized versions of Buffalo Bill Cody, played by Baldwin, and Wild Bill Hickok, played by Brolin. In this reagrd, it is similar to the mega-awesome "Young Indiana Jones" series that ABC aired during the early '90s.

The male members of this group roughly resemble a 19th century boy band. Cody is the hot but not-so-bright one, Hickok is the tough guy with a temper, Kid and McSwain share the role of the quiet and shy member of the group, and Dixon and Buck adds the ethnic vibe to the mix.

The Studly Six and Lou work under gruff and rough old coot Teaspoon Hunter, who has the proverbial soft center under the tough exterior. His role extends beyond playing surrogate dad to trying to maintain the peace as the town's marshal. This responsibility often leads to Teaspoon deputizing one or more of his riders in response to a threat.

The remaining member of the core group is Rachel Dunne, who is the new caretaker of the express station where the crew lives.

The second episode of the season, which is the first in the DVD set, establishes that Rachel is escaping a true old West-style trauma from her past. This episode additionally includes a hilarious scene that involves the then ongoing efforts of Lou to conceal her gender from Teaspoon.

The following clip, courtesy of YouTube, is of the aforementioned Lou/Teaspoon scene.

Many episodes place one or two of the show's two-legged stallions in the spotlight. Hickok-centric episodes include him contending with a bank robber who is impersonating him and another episode in which Hickok competes with a bounty hunter to bring in a separate bank robber who believes that his crimes are justified.

An amusing Cody storyline has his buds convincing him that disrespecting Buck's religious beliefs has brought a curse on Cody's head. All this might have been an excuse to have Baldwin don a loincloth.

Buck being a half-breed results in his getting some of the best stories in a season full of strong episodes. One of these involves the rescue of the wife and daughter of storekeeper William Tompkins seven years after a tribe captured them.

The complications from the rescue include the daughter experiencing Stockholm Syndrome in the form of identifying more closely with the tribe than the settlers and the wife entering a romantic relationship with a tribe member during her unfortunate incarceration.

Another Buck episode has him assist a military officer who served with Teaspoon during that man's Army days with an effort to peacefully remove a tribe that is occupying land that the U.S. government wants. Much of the conflict in this one includes doubts regarding Buck's loyalty to the settlers and his feelings regarding taking land away from the tribe. His stance is that the tribe wants their own land, rather than a replacement parcel.

The arguably best episode in the second season revolves around the death of a traveling elixir salesman triggering intense panic regarding a cholera outbreak. This one is an apt allegory regarding the same  undue fear that existed regarding AIDS in the early 1990s.

The season finale is a wonderfully funny and twist-laden two-parter. This one has Teaspoon and his crew trying to rescue someone near-and-dear to Teaspooon  from a man who is holding that loved one in exchange for a prisoner who faces an imminent hanging for bank robberies. This episode involves so many characters, false developments, multiple motives, and exchanges of captives all around that you almost require a scorecard to keep up. The good news is that this well-told story is worth the effort to keep up.

The final word regarding "Riders" is that they truly do not make them like this anymore and no cast has ever been easier on the eyes than this group. All this combines to make "Riders" a great choice when you want to truly escape the plethora of woes in our current society.

Anyone with questions or comments regarding "Riders" is welcome to email me; you can also find me on Twitter via @tvdvdguy.