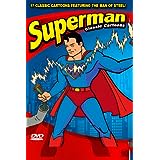 TGG Direct's recent DVD release of  the 17 Superman theatrical shorts that animation legend Max Fleisher created between 1941 and 1943 provides the dual treats of seeing the first series in which Superman appeared on film in any form and getting a look at classic animation.

The website Supermanhomepage.com reports that the pilot cartoon cost $50,000 and that each subsequent entry in the series cost $30,000.  This article also points out the detailed artwork that reflects the early '40s very well and the all around artistry, which includes awesome soundtracks, that explain those high budgets.


Based on eight of the seventeen cartoons in the set, it seems that the apparently nameless city editor is not Superman mainstay Perry White. Other probable lore omissions are the absence of kryptonite and super-villain Lex Luthor and other familiar foes. Further, the only sign of Jimmy Olsen is a seemingly unnamed late-teens creepy and gawky bucktoothed redhead.

Kryptonite first appearing in Superman lore in the late '40s explains its absence from the cartoons. However, the existence of the omitted characters predates the cartoons.

Said pilot start things off with an illustrated version of the "more powerful than a locomotive, able to leap tall buildings" narrative that the Supermanhomepage article states that these cartoons introduced. The remaining 16 shorts open with either this introduction or a variation that compared the man of steel to a hurricane.

The next segment in the roughly seven-minute pilot provided a slight variation on what seems to be the standard origin story that has Ma and Pa Kent finding little Kel-El in a field. (This may have contributed to the myth that storks deliver babies to cabbage patches.)

The following clip, courtesy of YouTube, is of this origin story. It also provides a limited sense of the awesome quality of the animation in these cartoons.

Superman's first adventure then establishes a pattern that holds true for most of the cartoons in this series. The last son of Krypton is in his guise of mild-mannered reporter Clark Kent when he and fellow journalist Lois Lane learn of an evil scheme that a mad scientist has hatched.

Lois recklessly rushes off into the clutches of said evildoer in the midst of his creating mayhem in Metropolis; meanwhile, Clark heroically declares "this looks like a job for Superman," surprisingly indiscretely dons his Superman duds in a stock room at the Daily Planet building, and flies into the midst of the action.

Superman next struggles a little bit to disable the death ray that is destroying his community and then swoops in to rescue Lois and the mad scientist from the latter's crumbling lair.

The next scene is of the headline of the story that Lois writes, followed by Lois needling Clark about his inferiority, and the fade-out is of Clark's knowing smile.

Standard variations of that story line are criminal gangs and a group of saboteurs who are led by a man with a passing resemblance to Adolph Hitler. This one ends with Superman flying the female intelligence agent, who is filling in for Lois as the damsel-in-distress of the week, to the U.S. Capitol and saluting the American flag as he goes up, up, and away into the sky to engage in his next fight for truth, justice, and the American way.

One further variation is a "King Kong" style story that also may have inspired "Jurassic Park III." This one has a wonderfully scary frozen dinosaur who is on display in Metropolis causing mayhem after thawing out. Of course, (presumably) he captures Lois in the process.

Just as is the case with 100s of other awesome series that closely follow a formula, the fun regarding these Superman cartoons is seeing both what variation is presented and wondering if the writers will vary from it.

Anyone with questions regarding these cartoons or any Superman lore is encouraged to email me; you can also connect on Twitter via @tvdvdguy.