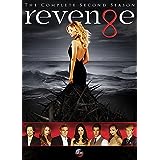 The 22 episodes in the DVD set of the 2012-2013 second season of the current ABC drama "revenge" demonstrate that seeking retribution is the new trend among most seasonal residents of the upscale Hamptons region of New York since main character Emily Thorne, nee Amanda Clarke, arrived there seeking payback plus interest.

The general nature of Thorne's vendetta relates to said "one-percenters" who make up the "Dave Clark[e] Five" and those in their inner circles playing a role in the unjustified downfall of her father roughly 20 years earlier. Considering the complexity of that lore, readers who are unfamiliar with the series are asked to please catch up via Unreal TV's review of  the DVD release of 'revenge' S1.

Like the recently reviewed DVD release of the second season of the ABC fantasy-based drama "Once Upon A Time," the look and plots of "revenge" take a darker tone in that series' sophomore series (which does not suffer from any hint of a slump.) Much of this relates to making Emily's classmate in revenge school Adian resurfacing in a very violent manner and becoming her literal (not always trustworthy) partner-in-crime.

As an aside, one of the many and truly special features in the second season DVD set provides an awesome inside look at l'ecole de vengeance. The blooper reel is just as terrific in that it shows the "revenge" stars stepping out of character in every sense of the word.

The consequences of the Emdian relationship include nudging Emily's other ally tech-wiz Nolan Ross a little closer to the edge of her personal inner circle. This coincides with youngish Mr. Ross, who looks and acts at least five years older than he did in the first season, engaging in his own series of revenge involving former and current love interests/executives at Ross' tech. firm.

The more dramatic manifestations of Ross losing much of his boyish charm include selling his fabulous home that is decorated in early Apple Store and trading his uber-preppy bright duds for darker options.

This season gets rolling with a flash-forward scene that is reminiscent of the first scene in the series' pilot in that both feature an apparently dead body. As is the case in the first season, many second-season developments show how this apparent tragedy comes to pass.


Emily's neighbors and the primary focus of her quest for vengeance the uber-wealthy Graysons jump on the revenge bandwagon by amping up their nefarious plots against each other. These include self-proclaimed boy wonder Daniel (rather than Dick) Grayson plotting to unseat his father Conrad from his place at the head of the family high-level investment firm, no longer presumed dead wife Victoria not taking her wedding day off to pursue her campaign against Conrad, and Conrad responding in kind to these (and many other) betrayals by his flesh-and-blood.

Conrad additionally transforms even more into his quasi real-life counterpart Mitt Romney during Conrad's campaign for governor of New York; fortunately, no golden retrievers were harmed during the making of these episodes.

Not to be left out, working class bar owner Jack Porter falls victim to a plot that relates to dealings between his father and that of the mid-level criminal who plots the downfall of the Porter family. Much of the drama regarding that relates to uncertainty as to whether Jack will sink or swim.

One of the other numerous quests for retribution involves a campaign against a foster mother who makes Joan Crawford seem like June Cleaver. This plot line  includes a scene that is perfect for a Hansel and Gretel story arc on "Once."

"revenge's" now-standard flashback episode is arguably the best of the second season. This one, which is chockful of revelations, is set during the 2006 Thanksgiving season. This turning back the clock allowing for a cameo by one the most likable first-season cast member, who suffers a sad death near the end of that season, is the nicest part of this offering.

The storyline from the flashback episode that is of greatest importance to 'revenge' lore can be thought of as "When Adian Met Emily." These segments provide a look at the early stages of Thorne's campaign and provide the background regarding Adian's own baggage. (This will be hilarious when you watch the episode.)

The similarly named Adrienne Barbeau of the '70s sitcom "Maude" literally plays a role in a more fun plot from "That 2006 Show." She portrays Victoria Grayson's mother Marion Harper in a story that demonstrates a couple of  well-accepted truths.

Marion's outlook on life and general behavior support the theory that looking at the mother provides an accurate image of the daughter in 20 years. Additionally, Marion learns in a scene that puts the confrontations between Krystle Carrington and Alexis Colby in the '80s prime time soap "Dynasty" to shame that payback truly is a bitch.

The final second-season episodes are explosive in many ways and set the scene for great drama in the current third-season episodes. This has at least one reviewer counting the days until the August 2014 DVD and Blu-ray release of that season.

Anyone with questions or comments regarding "revenge" is welcome to email me and can be assured that your communication will not end up in the hands of your enemy. You can also connect on Twitter via @tvdvdguy.