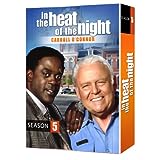 TGG Direct's release of the fifth season of the eight-season Carroll O'Connor procedural "In the Heat of the Night" coincides with releasing the previously reviewed fourth season of this series. The episodes in both seasons demonstrate the lack of a sophomore slump regarding this series.

The only downside of this release is that clearance issues prevent including four of the twenty-three episodes in the fifth season.

The premise of this '90s procedural is that it is Carroll O'Connor's "Matlock" like follow-up to his awesome run as Archie Bunker in "All in the Family" and the "Family" spinoff "Archie Bunker's Place." O'Connor's Bill Gillespie in "Heat" is the sheriff of small southern town Sparta, Mississippi that has a surprising number of murders and other felonies for an otherwise sleepy and peaceful burg.

"Heat" is also notable for being based on a book and subsequent film of the same name that tells the tale of  MR. Virgil Tibbs, played by Sidney Poitier, facing challenges associated with being a black big-city detective who relocates to the aforementioned small southern town.

O'Connor does a particularly good job in the fifth season, slightly toning down an already decent southern accent and bringing his overall acting down a notch. Further, Howard Rollins does well as chief detective/father of year-old twins/part-time law student/devoted husband and citizen Tibbs. The rest of the cast, including O'Connor's son Hugh as one of his underlings, does equally well as the police officers and citizens of Sparta.

The fifth season gets off to a great start in an episode in which Mississippi native Stella Stevens guest stars. Stevens plays Gillespie's former lover who winds up dead soon after seeking him out after a roughly 20-year absence. Stevens does a fantastic job, and the episode introduces us to a new member of Gillespie's family.

As an aside, Stevens also wonderfully plays a very frisky veteran actress in the season premiere of the second season of the '80s sitcom "Newhart." Unreal TV is reviewing the DVD release of that season within the next several days.

Another episode from early in the season is a wonderfully fun southern gothic offering. The murder victim this time is an uber-wealthy man who dies while hosting his annual high-stake poker game that includes enjoying the services of prostitutes literally under the nose of his wife. Said wife's acceptance of this once-a-year blow-out, her refusal to abandon her home during this event, and the indications of her own extra-marital activity add to the steaminess of this episode.

Another fifth season episode follows up on a fourth season episode by having Captain "Bubba" Skinner return to Los Angeles on official business. This puts him back in touch with the lady detective with whom he bonded on a trip during the prior season.

A later episode harkens back to a third-season episode in which a married white man who fathers an illegitimate child with a black woman is murdered. The fifth-season episode relates to the efforts of the murdered man's wife to obtain custody of this child from council member Harriet DeLong, who has a close relationship with Gillespie. The themes in this one are about as close to racial issues as fourth and fifth-season episodes seem to get.

The fifth-season DVD set winds up with "Family Reunion," which has the same southern gothic vibe as the wonderfully titled "Liar's Poker" referred to above. This one has a bank robber returning to confront the ex-wife who has held onto the loot from his heist for roughly 10 years. The twists associated with his quest for the ill-gotten gains and her efforts to protect her family and the remains of the haul are worthy of a Coen brothers film.

These episodes (as well as the others in the fifth-season set) simply are a nice reminder of a time in which procedurals relied on good stories and interesting characters without taking gore and personality quirks to extremes.

Anyone with questions or comments regarding "Heat" is welcome to email me; you can also connect on Twitter via @tvdvdguy.