'Cloudy With a Chance of Meatballs 2' BD: Awesome Family Film and Description of State of the Union 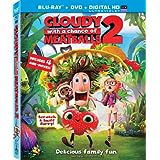 Today's Blu-ray and DVD release of the very clever 2013 animated film "Cloudy With a Chance of Meatballs 2" coinciding with President Obama's State of the Union speech is too amusing to ignore. This title is a very apt description of our national woes and of the "meatballs" on both sides of the aisle charged with resolving those challenges.

Fortunately, silly escapist fun like "Cloudy 2" provides a much-needed break from thinking of things such as the 62.5-percent employment participation rate and a royally botched Obamacare system. Watching the shenanigans in Blu-ray, which comes with a DVD format disc as well, is particularly awesome and well worth spending a couple of extra dollars to do so.

For those unfamiliar with the exceptional "Cloudy" franchise, which is based on a classic children's books by Judi and Ron Barrett, it revolves around the adventures of well-meaning but flawed inventor Flint Lockwood. His first film and book adventure has him trying to save the day after his invention that is designed to convert water into food in a controlled manner creates mayhem that Flint and his fellow Swallow Falls residents must resolve.

The following clip, courtesy of YouTube, of "Cloudy 2's" trailer provides a great sense of the plot and the related infectious fun.

"Cloudy 2" begins in the aftermath of the disaster around which the first film centers. A group from Live Corp. swoops in FEMA style for the stated purpose of evacuating the folks of Swallow Falls to facilitate a clean-up of the havoc-creating food.

The evacuation leads to Flint working for Live Corp. with the hope of joining the team that directly reports to company head Chester V., who is an innovative genius and Flint's hero.

A "Jurassic Park II" style twist that has Flint's machine that causes the problem in "Cloudy 1" transforming the created food into food-animal hybrids known as foodimals has Flint and his friends returning to Swallow Falls to once again save the day.

The new creatures include the incredibly cute sentient and highly mobile strawberry Barry, who has his own equally cute plush toy. Chimpanzee-shrimp hybrids known as shrimpanzees and very pretty flamangoes are almost as cute as Barry and are just as harmless.

The more seemingly fierce creatures are tacodiles and the heavily featured cheespiders.

These imaginative creatures and the greatly transformed Swallow Falls, which now has a gooey maple syrup swamp, make for a fun movie. Examples of the wonderfully juvenile humor that appeals to the eight-year-old in all of us include the entrance to Flint's abandoned lab being through a port-a-potty and a separate scene that includes a joke about cutting the cheese.

The tone of the film is nice and free of the heavy-handed messages that can infect such fare. The lessons this time include knowing whom to trust and learning to not take everything at face value.

Bill Hader, who did spectacularly as Stefon on "SNL," does a terrific job providing the voice of Flint. He conveys that character's shifting moods and overall geekiness exceptionally well.

Neil Patrick Harris also adds to the fun in his role as the voice of Flint's monkey/pal Steve; as is the case in the first film, Harris' vocalizations are among the best aspects of the film. Arguments with a shrimpanzee and with Barb are hilarious, and merely thinking about either film gets the cry of "Steve!" stuck in your head for days.

In addition to the afore-mentioned scratch-and-sniff cover, the DVD and Blu-ray versions offer a plethora of "making of " special features that include a look at creating the foodimals.

The features that are exclusive to the Blu-ray/DVD combo set are deleted scenes and four roughly eight-minutes shorts starring members of the "Cloudy" gang. The quasi-self-explanatory "Steve's First Bath" is the best of a great batch.

The final results of this experiment in "weird science" is that it shows the awesomeness that the right mixture of writers, animators, and voice actors can produce.

Anyone with questions or comments regarding "Cloudy 2" is welcome to email me; you can also connect on Twitter via @tvdvdguy.