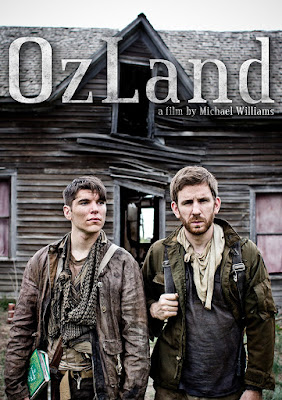 A spectacular element of "OzLand," which is available on DVD and the streaming service that the Wicked Witch of the Pacific Northwest owns, is that the obsession that a central character develops on finding The Wonderful World of Oz is comparable to the response that most people will experience on watching this film by producer/director/writer/cinematographer Michael Williams. Folks already familiar with the (reviewed) more recent Williams joint "The Atoning" will understand this enthusiasm; Williams being kind and gracious in real life is a bonus.

One person wearing so many hats in a production usually warrants jokes regarding whether they also build the sets, provide craft services, and clad the actor in their personal clothes. However, the 27 year-old Williams performs every function well and likely could have stepped in the role of drifter Emri. The POSSIBILITY that this beautifully shot film will come out on Blu-ray is exciting.

Williams does provide a treat in the form of the (separately sold) soundtrack of the country music in the film; these songs achieve the ideal of subtly helping set the mood.

The numerous festival accolades, including the Best Feature and Best Cinematography honors at the 2015 Magnolia Independent Film Festival, validates the high praise in this review.

The following YouTube clip of the "Ozland" trailer is guaranteed to elicit the aforementioned excitement regarding the film.


"OzLand" opens with ruggedly handsome Emri and dreamy innocent Leif walking through the beautifully shot post-apocalyptic (presumably Shenandoah Valley) world in which virtually everyone else has dried up. This modern-day George (Emri) and Lennie (Leif) from the Steinbeck novel Of Mice and Men are drifting through this world trying to make sense of what happened while following the advice of Horace Greeley and The Pet Shop Boys to go west in search of a better existence.

A horribly missed opportunity occurs when big brother figure George tells Leif to focus on survival; Leif not smiling and responding "I'm your lover, not your rival" is an almost painful omission.

The magic begins when a typical exploration of a devastated structure covered in thick layer of dust scores Leif a copy of Oz. This excited literate man subsequently reciting passages from Oz to illiterate Emri entertains him but does not prompt him to share the belief of Leif that the story is real and that these men are living it.

Although the optimism that Leif experiences is not infectious, the introduction to the wonderful world of  Oz colors (no pun intended) the remaining adventures of our "leftovers." At the heart of it, the Depression-era tornado in the Judy Garland film provides an explanation for the substantial rapid decline in the population of at least the southern United States in "Ozland."

Watching the glee of Leif on meeting a tin man, finding the abandoned home of a lion and munchkins, encountering a scarecrow who is more Christ figure than lovable dope, and finding himself hot on the trail of Dorothy reinforces the sense of wanting to take a road trip with Leif portrayor Zack Ratkovich; his horrifying encounter with uberscary flying monkeys makes you want to protect him.

Ratzovich particularly shines in a scene in which Leif and Emri discuss what they want from the wizard. This provides further insight (and sympathy) regarding the character.

Emri portrayor Glenn Payne also plays his part well. He is a kind and patient protector of his naive little buddy; his special moments include comically acting out the grotesque version of the tin man that the 1939 film Disneyfies.

The Mice vibe is particularly strong in a scene late in the film; the boys are near death when Emri discovers that Leif has been holding out for a fantastical reason. Many of us would have killed Leif out of frustration and/or to protect him from an existence worse than a quick demise.

The climax provides an awesome end to a film with no bad scenes. Only one boy utilizes a chance to go home; post-viewing communication with Williams points out that this rapture involves a subtle element of ascension.

Williams takes a note from the DCU and the Marvel Universe in including a stinger halfway through the closing credits. Our survivor is continuing his journey with a new special companion who is very true to the spirits of both the ascended partner and Oz.

The literally final moment of the film is another reflection of the kind and loving nature of Williams; he dedicates the movie to 31 year-old crew member Casey Spradling, who dies soon after finishing "Ozland." One can easily imagine Williams and the rest of the team missing him most of all after separating to go on to their next projects.

Anyone with questions or comments regarding "Ozland" or Williams is strongly encouraged either to email me or to connect on Twitter via @tvdvdguy.