'Galavant' CS: DVD: Once Upon A Time Into the Woods 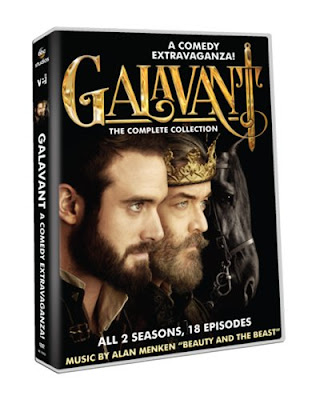 This witty show with a clever concept is such an awesome example of the style of ABC parent company Disney that one can only hope that the prediction in an amusing tune by Disney songwriters Alan Menken (who makes somewhat of a cameo) and Glenn Slater that the series will end up on a basic cable network comes true.

The following YouTube clip of an extended ABC promo. for the series provides an excellent sense of the fun and excitement of this creatively successful venture.


"Galavant" centers around heroic quests by the titular knight (Joshua Sasse) in this 1261-set series with catchy show tunes as accompaniment; an S2 reveal regarding his first name is less monumental than learning the full names of MacGyver and Kramer but nonetheless is a fun moment.

The series opens with evil King Richard running off with love interest Madalena on the cusp of that damsel in apparent distress becoming Mrs. Galavant. That sends out hero into a downward spiral until princess with a secret agenda Isabella recruits this reluctant hero to travel with her to her conquered land of Valencia for him to reunite with Madalena and for Isabella to get her parents back on the throne to which their high birth entitles them.

Much of S1 revolves around this epic journey on which Galavant must build himself back up and survive perils that include a jousting contest and landlocked pirates to get the girl.

Arriving on the scene leads to several surprises for all and ultimately a planned duel that includes humor related to royals bravely making such a challenge knowing that they will have a disposable subject actually fight.

An especially rousing number is a highlight of the S1 finale that sees an unlikely couple literally sail off into the sunset together and another character facing an arranged marriage that arguably is perverse for reasons that extend beyond being between close blood relatives.

S2 takes on a strongish "Game of Thrones" vibe as events build toward a three-kingdom war that largely is instigated to amuse a royal. This all starts with another rousing musical number and soon leads to a stripped-down Galavant being at the mercy of a disco-loving new queen to enter the scene.

An awesome element of "The Princess Bride" enters the picture regarding an absurd war between giants and dwarves who are more alike than they realize. Throwing in a group of "mostly dead" characters and much anticipation regarding fun in storming a castle not inconceivably contributes to this vibe.

The writers visit even more well-known ground in comically delving into sibling and father-son relations. A pure classic sitcom episode has Galavant going along with the ruse while visiting the parents of squire Sid, who told his actual sire that he was the knight and that our hero is the servant.

Much of the humor in spoken and sung word relates to bringing a 2017 sensibility to the 13th century. Examples include Xanax the magician being an expert at getting people to relate. We further get several celebrity cameos that include John Stamos portraying a fellow modern-day hunk.

Anyone with questions or comments regarding "Galavant" is encouraged either to email me or to connect on Twitter via @tvdvdguy.