'Christmas With the Andersons' DVD: White Trash to White Christmas Tale of Rags to Riches and Reversal of Fortune 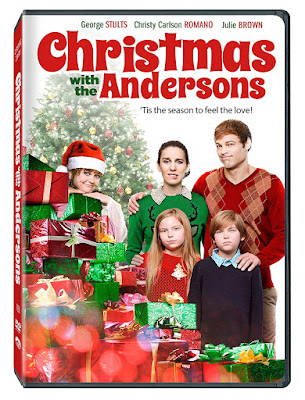 Monarch Home Entertainment releasing actual and figurative Christmas-themed family-friendly fare Hallmark Channel fare is an early sign of the holiday season each year. The topic for today is the Monarch October 24, 2017 release of the 2016 Christy Carlson Romano and George Stults comedy "Christmas With the Andersons." An effort to stay on the nice list of Santa is motivating also at least covering the Monarch release of "A Puppy for Christmas" by mid-December. "Married for Christmas" and "A Cinderella Christmas" round out the 2017 holiday quartet.

The following YouTube clip of the trailer for "Christmas" offers a fun glimpse of this amusing film.


Former Disney Channel princess Romano of "Kim Possible" and "Even Stevens" plays Caroline Anderson, who is living a modest lifestyle in Georgia with equally pink neck (and adorably effervescent) law student husband Michael (Stults of "7th Heaven") at the beginning of "Christmas." They are racing from their starter home to the hospital to avoid the white trash stereotype of Caroline giving birth to elder child Julia on the side of the rural two-lane road near that honeymoon cottage.

The action quickly moves ahead 10 years to the lavish annual holiday party that these modern-day Beverly Hillbillies hold in their southern California mansion for what they identify as disadvantaged families but whom seem like middle-class folks. This largese comes courtesy of Michael now being a ruthless corporate attorney/partner in the law firm of his father.

The party clearly establishes that the titular couple engages in the inadvertent snobbery that is characteristic of the rich and famous. Anyone with any familiarity with this syndrome from any perspective will find this interaction hilarious.

The holiday celebration continues with the family following the tradition of a wealthy man buying his wife a hobby business; in this case, Michael surprises Caroline with ownership of a boutique that sells high-end bath products. The "central-casting" aspects of this includes Micheal gleefully telling Caroline that she can hire people to do the actual work and spend her time having the fun of ordering them around.

The events that lead to the Christmas miracle that is central to these films are twofold. Michael loses his job, and the boutique is a colossal failure.

Although the couple hides their personal declines from each other for a while, the truth ultimately coming out leads to the humbling that is at the heart of "Christmas" in every sense of that word. "Aunt Pearl" in the form of uninvited long-term house guest free-spirited Aunt Katie (Julie Brown of "Earth Girls Are Easy" and "Clueless") from back home guides this transformation.

The climax of the film centers around the valiant efforts of Caroline to salvage her annual literally charity begins at home event one year after going from the Queen of Versailles to being down and out in Beverly Hills. Of course, a good time is had by all at the understated party. Additionally, the nuclear Anderson clan learns that happiness does not require having money.

Although the copious fluff and two adorable moppets make for a fun film. "Christmas" deserves praise for not pulling off a holiday miracle. Our heroes do not experience an 11th-hour surprise that restores them to their former glory, nor do they obtain evidence of the inherent goodness that dwell in all. They simply end up in a happy place that seems reasonably realistic.

Anyone with questions or comments regarding "Christmas" is encouraged either to email me or to connect on Twitter via @tvdvdguy.