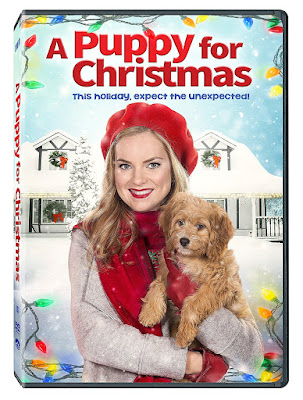 This article on the recent Monarch Home Entertainment DVD release of the Hallmark Channel style 2016 holiday romcom "A Puppy for Christmas" completes the plan that the review of the similar Monarch release "Christmas With the Andersons" outlines for making the nice list; one can only hope that Santa sees this and has an extra Sony stereo 4K player.

The following YouTube clip of a trailer for "Puppy" perfectly conveys the cuteness and the humor of the film. Narration regarding "the surprises you never see coming" is an inadvertently hilarious element that makes this promo. even more fun.


Santa considerations aside, both films are tasty sugar cookies for the eyes and the ears. "Andersons" revolves around a nouveau riche couple that gets a 2010s reality check, and "Puppy" centers around 30ish modern-day Lois Lane Noelle, whose personal and professional downward spiral coincides with adopting adorable titular pooch Buster.

The movie begins with magazine journalist Noelle happyish living with persnickety yuppie "suit" Todd and making progress on an article about the secret to a long-term relationship. Her initial mild dislike of "outdoor man" adventure journalist Liam essentially seals the deal regarding those two.

Finding herself homeless and having a career crisis near the end of December prompts Noelle to accept the invitation of always cheerful Liam for her and the "Marley" like mischievous and destructive Buster to spend the holidays with him at his rural childhood home. This colonial in the woods is the Christmas tree farm of the grandfather who raised Liam and his assertive lesbian sister Joyce, who is attracted to the fresh meat.

Throwing Joyce in the mix adds a nice touch of edge to the typically very traditional Hallmark/Monarch fare. Her highlights include blatantly getting Noelle drunk on moonshine and riding a snowmobile into the woods to chop down a Christmas tree and come roaring home with it in tow like a large woodland creature whom she killed with a crossbow.

Additional spice comes in the form of a widowed cougar who likes 'em young and hunky. An arguably PG post-coital scene adds edge regarding this aspect of "Puppy."

Foreshadowing in addition to Liam and Noelle starting as friendlyish co-workers comes in the form of the farm facing a foreclosure that involves turning the property into a resort and there being a "rainy day" fund that no one can find.

It is equally predictable that Todd has a change of heart and attempt to reconcile with the one who got away; an additional wrinkle that further distinguishes "Puppy" from other Hallmark/Monarch fare is that he also plays a role regarding developments beyond his personal relationship with Noelle.

The Hallmark/Monarch pattern continues with Todd arriving on the scene just as Noelle and Liam are close to sealing their own deal; the entertaining extended climax involves Buster playing hero, a last-minute (predictable) treasure hunt, and an obligatory scene that makes Todd look foolish. An epilogue shows that the good guys predictably make positive changes in their lives (Joyelle?) and that Todd ends up where he deserves.

The aforementioned edges make this one a small fraction more adult than other holiday fare in the Monarch catalog. It is a bit more for folks 12-to-80 than 8-to-80.

Anyone with questions or  comments regarding "Puppy" is encouraged either to email me or to connect on Twitter via @tvdvdguy.