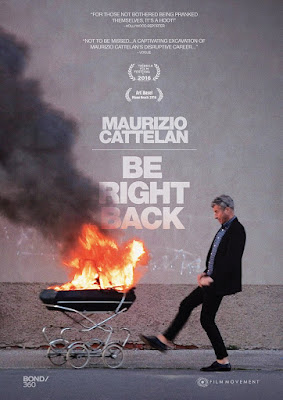 The Film Movement-Bond/360 December 5, 2017 joint release of the 2016 documentary "Maurizio Cattelan: Be Right Back" provides further reason to celebrate this perfect partnership. Like the recent (reviewed) "Karl Marx City" and (also reviewed) "Gun Runners" (plus a handful of other documentaries), what can be considered Film 360 introduces viewers to compelling individuals whose lives scream for big-budget biopics. One can only hope that a museum, library, or university runs a festival of these films.

The "character" this time is the titular native Italian conceptual artist, who is equal parts sculpture and con artist. We also learn that this "real live boy" who grows up in poverty has a strong interest in "Pinocchio."

Watching the following YouTube clip of the official trailer for "Cattelan" is a sure-fire way to want to get the film.


The related themes of "Cattelan" are that the our subject has an awesomely twisted sensibility and that you should never believe anything that this man whose nose must be miles long represents. Prime examples of the former are a piece in which a life-sized squirrel is slumped over a mid-20th century style kitchen table after committing suicide and a better known piece that depicts Pope John Paul II under a meteor. Hearing the back stories of the pieces from the sister of Cattelan and from an expert on him and his work provides very insightful context.

Despite the fun of hearing about these two pieces, not hearing much about a well-known work that has real and fictional heroes face off against evil counterparts is disappointing. Director Maura Axelrod compensates for this by including an interview with the first roommate of immigrant starving artist Cattelan. 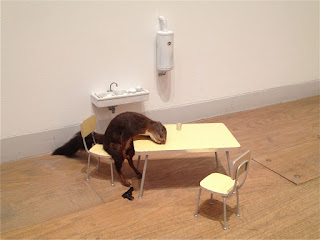 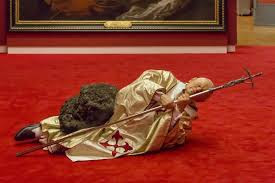 The con artist aspects of the life of Cattelan are what transform "Cattelan" from an interesting film about a creative artist with a dark side to a movie regarding which one can imagine Christian Bale producing, directing, and starring. This starts with the young man as an artist who decides to eliminate the middle man regarding obtaining prominent exposure in the art world. Another early incident that involves a creative block provides "Cattelan" with its title.

The delight continues with a huge (but precedented) hoax on viewers that elicits equal laughter and a WTF response. This also shows that Cattelan knows how to influence people but is not so great at making friends. Part of the awesomeness of the latter is that he is not concerned about playing well with others.

A climax that works equally well as a reel-world highlight is a highly risky proposal for a retrospective exhibit of the work of Cattelan. The practical aspects of this could cause the exhibit (and the building housing it) to literally collapse on itself; this occurring in the real world means that a Hollywood ending (which is less interesting than the potential for massive destruction and for the wiping out of roughly 20 years' worth of work) is not guaranteed. A follow up that essentially is a big beefy middle finger at the folks who risk all in supporting this venture is fantastic.

Axelrod ends this portrait of this scamp on a perfect note; the final scene in the closing credits shows that she does not follow the pure documentary form. However, the charm of this outtake leaves you smiling.

Anyone with questions or comments regarding "Cattelan" is encouraged to email me; you also can connect on Twitter via @tvdvdguy.