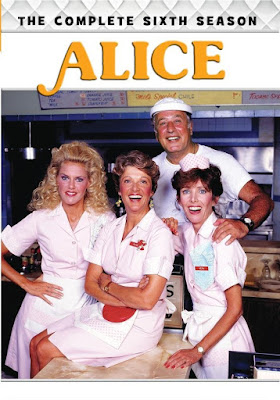 Warner Archive gives fans of classic sitcoms an early Christmas gift (complete with a traditional Christmas episode) in releasing "Alice" Season 6 on DVD on December 5, 2017. This coming a few months after the (reviewed) S5 release several years after releasing (also reviewed) S4 makes 2017 an especially good year for fans of this '70s and '80s series about a widowed mother raising a teen son while working in a run-down diner in Phoenix and aspiring to be a professional singer.

Archive also comes through regarding a concern related to the S5 release; that set includes a few S6 episodes that initially were scheduled to run in S5; the S6 set inserts them in their proper chronological spot.

Noting the comparisons (including catchy themes) between "Alice" and fellow "TV Land" show "Three's Company" from the same era helps understand the former in general and S6 in particular. Both series are entertaining whipped cream on the more substantial dessert in the form of denser sitcoms that are part of a well-balanced television viewing diet. CBS often scheduling "Alice" with "All in the Family" and other Norman Lear fare perfectly illustrates this.

The parallels continue regarding cast changes. A well-known "True Hollywood Story" is that break-out "Company" star Suzanne Somers gets fired for being too demanding; this leads to the failed experiment of bringing "Cousin Cindy" onto the show only to fairly quickly replace her with Nurse Terri, who stays until the end.

Similarly, "Alice" gives its breakout star Polly Holliday her own (reviewed) spinoff "Flo" in "Alice S4; temporary replacement once and future waitress Belle lasts roughly one season worth of episodes before the Ellie Mae Clampett like Jolene comes on the scene in S5 and stays until the end.

The parallels continue with "Alice" and "Company" fizzling out in the late '80s as tastes change from whipped cream to more edgy and topical fare that the dramedies of that era represent.

"Alice" S6 awesomely has many of the most representative and/or memorable episodes of the season. The season premiere is a prime example of the numerous episodes in which restaurateur Mel uses the diner as collateral for a bet or other risky venture. The twist this time is that the waitresses (who have attended this rodeo before) consciously take a page from film of the era "9 to 5" in capturing and restraining their boss to prevent him from gambling the future of the group on a horse. The twist at the end is particularly notable.

The cleverly titled second episode "Guinness on Tap" has every element of a classic "Alice" episode. "Dingy" waitress Vera being despondent regarding having worked at Mel's for five years leads to the twofer in the form of one of the waitresses getting a shot at a better life and the standard sitcom plot of the era of trying to set a world record. In this case, Vera tries to tap dance consecutively for a longer period than anyone else on record. The 11th hour miracle this time involves a "special guest star" playing himself or herself. Past notables to do so include George Burns, Telly Savalas, Art Carney, and Dinah Shore.

The best stunt casting has Jay Leno and "Welcome Back, Kotter" star Ron Palillo as bikers who make the diner their new hangout. Much of the hilarity would not fly in 2017 in that it has the Leno character grab Alice and take her on an involuntary joy ride.

Regular special guest star Martha Raye shows up twice in her recurring role as the feisty mother of Mel; "Sharples v. Sharples" centers around a custody battle over a cookbook. The season finale "My Mother the Landlord" is more self explanatory; this one also is reminiscent of an S5 episode in which building manager Alice faces locking out a co-worker for not paying rent. (John Sylvester of "Kotter" is the stunt casting in this one.)

The aforementioned Christmas episode is the "Alice" version of "A Christmas Carol." Mel being particularly miserly at Christmas time earns him a Christmas Eve visit from deceased business partner Jake Farley, who takes on the task of showing Mel the evil of his ways.  A scene in which the waitresses and Tommy open gifts that are destined for the return counter has hilarious moments.

All of this works for the same reason that the wacky regular customers return to Mel's for breakfast and/or lunch most days; you visit entertaining friends who never disappoint.

Anyone with questions or comments regarding "Alice" is strongly encouraged either to email me or to connect on Twitter via @tvdvdguy.