'After Love' DVD: Gallic 'The War of the Roses' 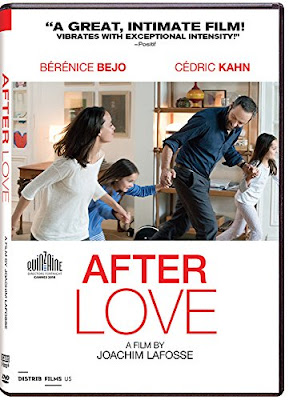 Icarus Films continues an awesome expansion beyond distributing "innovative and provocative" international documentaries on DVD to offering global films that earn the same distinction with the November 21, 2017 release of the 2016 French film "After Love."

The well-produced international theme this time is that Boris continuing to live in the martial home after the crumbling of his 15-year marriage to Marie makes their relationship far beyond complicated. Throwing in Dad being the fun parent to their young twin girls and Marie believing that the one who has the gold makes the rules adds entertaining toxicity.

This winner of top honors at the Philadelphia Film Festival and the RiverRun International Film Festival hits home because every relationship at least has a temporary point during which you do not love the person who shares your bed; many other relationships have a period in which that dislike is strong enough to consider calling it quits but the other person is still there; "Love" focuses on the next level when it seems that the differences are irreconcilable but the other person still occupies a seat at the breakfast table. Further, any decent parent never divorces his or her kids.

The following YouTube clip of a festival trailer for "Love" perfectly conveys the tone of this realistic film about the aforementioned period when the honeymoon period is ancient history.


The mother of Marie sums up the entire dilemma by noting that we live in a disposable society in which appliances and other household items end up in the landfill at the first sign of trouble; committed relationships are not discarded quite so easily but the widespread social acceptance of divorce and the liberal laws regrading it facilitate ending up in family court after the toilet seat is left up one too many times.

The New York Times provides the large picture in an article from several months ago that states that we end up with the wrong person. The reasoning is that what attracts us to someone also is the root of his or her crazy, and we do not see that dark side show until after putting a ring on it.

Marie is from a wealthy family, and Boris has more humble roots. She and her mother paid the down payment on the marital apartment (my people call them condos), and Boris the contractor personally did all the upgrades in the home. These contrasts extend to Marie having a stable job and managing finances well while Boris works sporadically and owes bad guys a significant debt.

A central dispute of the film is reminiscent of the hilarious 1989 Michael Douglas-Kathleen Turner black comedy "The War of the Roses" about a one-percenter couple who now violently loathe each other and who both refuse to vacate the family mansion. Although not this extreme, home-office dwelling Boris refuses to move until he gets what he asserts represents his equity in the home. This future ex-husband further infuriates his ex by not respecting boundaries and agreements regarding their living situation and their division of parental responsibilities.

Folks in the same situation can easily hear themselves in the conversations between Marie and Boris; the tough part is that both of their arguments have merit. Marie does pay the lioness' share of the bills and the parent who contributed to the down payment is on her side of the family. However, that contribution was presented as a gift to the couple as a unit. Boris has the additional valid point that his work on the home has value. One of his more telling heat-of-the-moment remarks essentially is that rich people are incapable of genuine generosity.

This film with a strong live-stage vibe plays out along realistic lines in that tempers ebb and flow, there is a temporary reconciliation, and the inevitable occurs at the end. This period between love and goodbye is what provides well-produced films such as this and "Kramer vs. Kramer" the drama that keeps them interesting.

Anyone with questions or comments regarding "Love" is encouraged either to email me or to connect on Twitter via @tvdvdguy.