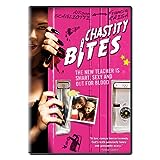 The awesome slasher comedy "Chastity Bites," which Grand Entertainment Group is releasing on DVD on February 11 2014, is a perfect example of the difference between an intentionally ooey gooey cheesy film along the lines of the uber-awesome Canadian television series "Todd and the Book of Pure Evil" and a movie with a comically distorted sense of self.

The above reference to the later category of films screams out for a plea to be thrown in the shallow water before I get too deep.

The wonderful campy premise of "Chastity" is that real-life 17th century "vampire" Elizabeth Bathory has selected the conservative southern California town of San Griento, rather than Sunnydale, as her next hunting ground. Unlike your traditional fangs-to-the-neck vamp, the newly renamed Liz Batho drains the blood of her victims into a font after slitting their throats.

Batho is also unique in that she does not use the collected bodily fluid to make bloodtinis; she applies it to her skin to maintain her youthful appearance; the only wrinkle (of course, pun intended) is that only the blood of a virgin will do the trick (yes, two puns in one sentence.)

Batho's brilliant scheme involves forming the school club the "Virginity Action Group" (or VAG), which only requires that members be pure. Unwitting popular girls who "won't go all the way" but will "go pretty f-a-a-r" populating the group adds a wonderful "Heathers"/"Mean Girl" vibe to "Chastity" that recruiting the mousy BFF of heroine Leah enhances.

Further, a favored viewing companion and highly significant other points out a strong similarity between Leah and said mousy gal pals and high school outcasts BFFs Daria Morgendorffer and Jane Lane of the uber-awesome former MTV animated series "Daria." This paid would love "Chastity" almost as much as their beloved television series "Sick, Sad World."

Star Allison Scagliotti does just as well playing the independent kick-ass Leah as she does in the role of kick-ass/uber-techie/cynical/surrogate sister/alternachick Claudia in the wonderfully campy Syfy original series "Warehouse 13." One difference is that the latter truly shows Scagliotti's love for her Artie.

The following clip, courtesy of YouTube and Grand, does a great job conveying both Scagliotti's performance and the spirit of the entire film.
Scagliotti particularly channels Claudia in the best scene in the film, which has an escape attempt prompting a virtually toe-to-toe encounter that involves truly creepy fetish play.

Similar memorable scenes involve the hunky boyfriends of the gals of VAG trying to persuade those mean girls to vo de oh doh.

The boys' arguments that denying them could cause physical injury and worse seem old as time, and one Heather's response that she offers a very close alternative reflects a trend that is popular among real-life purity ring wearers. One clue regarding that practice is that the philosophy of some people as to it is that "its only repugnant when I do it to you."

Eduardo "Eddy" Rioseco, who looks like a refugee from a Disney Channel original series, does a good job as an awkward teenager with the mindset of a feminist but the desires of a quarterback. He will never be a Damon or a DiCaprio in their pre "We Bought a Zoo" and "Great Gatsby" days, but one can hope that he achieves full-fledged indie flick darling status.

Louise Griffiths, who looks like a drag queen doing Marilyn Quayle, does a decent job as Liz but does not seem to embrace her role as evil seductress. She never approaches the top, let along goes over it.

On a more general level, the gore level is moderate and is limited to quick scenes of slashing throats; averting your eyes or fast-forwarding your DVD players are effective methods for avoiding them.

Rather than sleeping on it and providing an answer in the morning, the final conclusion is that "Chastity" is a great example of an "Elvira" style midnight movie.

Anyone with questions or comments regarding "Chastity" is welcome to email me; you can also connect on Twitter via @tvdvdguy.