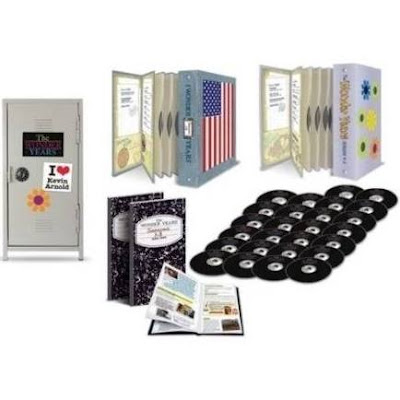 [EDITOR'S NOTE: A desire to attempt to do justice to the phenomenal design of the complete series locker edition of "The Wonder Years" and to the series itself requires a two-part review. This initial discussion focuses on the set itself and the early seasons. The follow-up covers the later seasons, including the precedent-setting series finale.]

Time Life very aptly extends its recent pattern of releasing DVD sets of variety shows (including the reviewed "Laugh-In" and also reviewed "Carol Burnett Show") from the '60s and '70s to rerelease a CS DVD set of the 1988 -93 dramcom set in the '60s and the '70s "The Wonder Years." This one is the product of  Carol Black and Neal Marlens, who also are the show runners of the '80s ABC famcom "Growing Pains."

The figuratively mind-blowing special-edition locker set requires beginning this discussion of "Wonder" with details regarding this set that deserves every design award out there. The Unreal TV library includes roughly 20 deluxe CS DVD sets, and this one far outshines all of them in cleverness and construction quality.

Our accolades begin with the locker itself being good quality metal that does not bend or warp. It sits on four small padded feet that keep the locker steady.

The delight continues with opening the locker and discovering more-than-ample room for the two loose-leaf binders that will bring back memories of personal wonder years; you also get a yearbook. The "but wait, there's more" item is a set of magnets for adorning the locker.

Each sturdy binder consists of the discs, complete with detailed episode synopses, of three of the six "Wonder" seasons. Each disc is in its own sleeve that allows removing it without any risk of scratching it.

The equally sturdy yearbook begins with fun autographs by most of the cast and crew; we also get copious photos and profiles from both back in the day and the present.

Moving on to the actual show, this early 30-minute series with almost equal "dram" and "com" also almost certainly is the first in which an adult narrator (Daniel Stern in this case) comments on his "wonder years" roughly 20 years earlier; this concept dates at least to the early '60s in which teen Dobie Gillis regularly breaks the fourth wall in the spectacular "The Many Loves of Dobie Gillis" sitcom.

"Years" is notable as well for following the wisdom of the '70s sitcom set in the '50s "Happy Days." Producer Garry Marshall builds that series around the concept that a series that is based in the past does not look dated in the future.

An observation in the aforementioned yearbook addresses the use of era in the series. This notes that we do not see how our childhoods parallel national events and trends until we achieve full adulthood.

Future television show director and occasional adult actor Fred Savage plays "Years" lead Kevin Arnold. The expressiveness of Savage and talent for expressing non-offensive disgust at the stupidity of peers and parents alike show the reason for casting him in the classic film "The Princess Bride." (Seeing him get in the spirit of "Years" fantasy scenes also is fun.)

Despite a well-known predictable element, the "Years" pilot deserves classic status. We meet 12 year-old Kevin during the summer of '68 before he enters the newly renamed Robert F. Kennedy Junior High. Early narration includes commentary that the suburban setting of the titular period in the life of Kevin lacks the benefits and the disadvantages of the city and the country but provides a pretty good place to grow up.

A related amusing aspect of this is that the series is set in the northeast (most likely New Jersey) but that wide shots clearly show that the neighborhood is in California.

Older brother Wayne gets right down to humiliating and pummeling Kevin without provocation; this sets the stage to establish the appeal of literal boy-next door Brian Cooper, who is the big brother of series-long love interest/ literal girl-next-door Winnie Cooper (Danica McKellar).

Nineteen year-old Brian has gorgeous blonde hair, a rock-hard body, a cool car, and smokes. He steals his first scene by calling out to Wayne to either leave Kevin alone or endure the same punishment that Wayne is dishing out.

The narrator sharing that Brian goes onto Viet Nam makes the fate of this character predictable even to new comers to this series.

Other '60stastic early episodes center around Kevin and nerdy best friend Paul getting excited to reap the benefits of the brand-new law requiring adding sex education to the public school curriculum, the Apollo 8 mission to orbit the moon and safely return to earth, oldest Arnold child high-school flower child Karen entering a relationship that is more open than she understands with a radical college student (John Corbett of "Northern Exposure" and "Sex and the City,") and a Christmas episode in which the Arnold children and their housewife mother Norma try to persuade gruff middle-management job holding Dad to buy a color television.

All of this works because the Arnolds are a real family with real issues that are nor presented in an overly comic or dramatic fashion. No one is extreme, and the problems often are not solved in 30 minutes. One early example is Kevin still incurring some wrath from his friends and classmates after mercilessly ridiculing them. There is not any third-act grand-gesture by our everyboy.

The spectacular copious special features include a 2014 cast reunion.

Anyone with questions or comments regarding "Wonder" is strongly encouraged to email me; you also can connect on Twitter via @tvdvdguy.