'Harmonium' DVD: Hitchcockian Tale of Man Struggling to Keep His Dark Past From His Wife 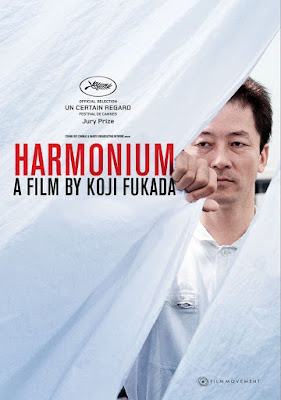 The Film Movement DVD of the 2016 drama "Harmonium" provides a chance to see the likely result of a coupling between Hitchcock and Ibsen. The related intense drama and the family issues provide perfect examples about the consequences of the sins of the father.

The accolades for this film with a strong live-stage vibe includes a 2016 Cannes Un Certain Regard award for writer-director Koji Fukada and the distinction of being a The New York Times  Critics' Choice selection.

As is the case in many classics from the masters mentioned above, "Harmonium" begins with what seems to be a typical day for machine-shop owner Toshio, his wife Akie, and their young daughter Hotaru. They are having a breakfast that does not seem to be any more tense than the morning meal of many nuclear clans across the world.

The archetype face from the past who jeopardizes future happiness comes on quiet and unassuming Yasaka appearing at the small machine shop when the workday commences. Soon learning that Yasaka and Toshio are long-time friends and that Toshio feels guilt about not staying in touch with recently released prisoner Yasaka during his unfortunate incarceration is only the tip of the iceberg.

Another initial sense that Toshio puts his friend on the payroll and allows him to move into his home due to an unstated debt also only is a small part of the story.

Both the reveals and the integration of Yasaka in the family life of his host escalate in roughly the first half of the film; as often occurs, a family outing (including Yasaka) is the beginning of a mid-point climax in "Harmonium." This includes taking a photo with copious symbolic value.

This mid-point climax involves a major incident involving Horatu; the remainder of the film is divided between dealing with the aftermath of that event and discovering the deep-dark secret of the new employee who also is close to the family.

The final climax begins with a stereotypical drive in the country regarding which everyone may not make it back home. In classic drama style, this involves the same issues of justice and revenge that make "Harmonium" compelling throughout. The evil deeds themselves are bad enough; discovering the extent of the "crazy" of a spouse is deeply unsettling.

Movement lightens things up (and gets highly creative) with the bonus Fukada short film "Birds" that it pairs with "Harmonium." This one that mostly involves a man, his wife, and his mistress sitting around a dining room table has even more earmarks of a classic drama than "Harmonium" despite the ultimately lighter tone.

Just about every line in this scene in which the wife confronts the husband about his affair brings a new reveal. This leads to things becoming totally unpredictably bizarre a few minutes before the end of "Birds." The manner in which this all is shown to make sense will alter a perception of every viewer.

Anyone with questions or comments regarding "Harmonium" or "Birds" is strongly encouraged to email me; you alternatively can connect on Twitter via @tvdvdguy,