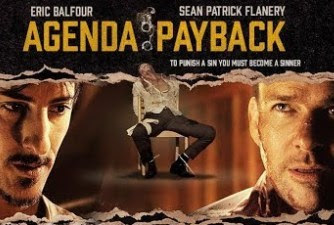 The Level 33 Entertainment VOD and limited theatrical release of the Austin-based Smokehouse Media film "Agenda: Payback" provides the almost unanimous majority whom a trusted special someone betrays wonderful catharsis. It further has an interesting concept and creative narrative technique that add fresh twists to the highly satisfying perverse revenge film. The final general note regarding this is that "Payback" only partially adheres to the principle that going down a dark path leads to ending up either in jail or in the ground.


The following YouTube clip of a "Payback" trailer provides a strong sense of the plot and the style of the film.

The strong '90s mob films vibe of "Payback" makes casting Sean Patrick Flanery (whose career begins with playing Young Indiana Jones in the eponymous ABC series of that era) as fast-talking hustler Steve Walsh apt. As the script-style text scrolling across the scene establishes, Walsh is living large in a luxury hotel suite with the wife of a "friend" when the film begins.

The nightmare of Walsh (and the fantasy of the rest of us) begins on him being knocked out and tossed in the trunk of a car within the first 10 minutes of the film. This occurring as Walsh is hyping his current big deal makes this particularly exciting.

The action soon shifts to the main arena of this film with a strong live-stage vibe. A literally bloodied-and-beaten Walsh is strapped to a chair in the basement of screenwriter Peter Farrell (Eric Balfour of "24"). Stating that misguided faith in Walsh costs Farrell virtually everything is not much of an exaggeration.

Balfour being a producer of "Payback" contributes a fun element of real-life to the film.

The cool part comes on soon learning that Farrell is pursuing the titular course of action for both fun and profit by selling other victims of Walsh sessions in the basement. One of the best of these confrontations effectively enforces the terms of a pinkie swear and should make Walsh happy he did not pledge one of two parts of his anatomy that surely is very dear to him.

"Payback" also awesomely proves that Hell hath no fury like a woman scorned. One client wants to ensure that she gets her money's worth; another visitor enjoys the mother of all revenge f**ks that may involve giving Walsh a taste of prison life.

The aforementioned clever narrative technique elevates "Payback" from being a made-for-basic-cable flick to a decent indie production from the cool capital of America. Team Balfour doing more than having a physically (but not verbally) restrained Walsh endure the wrath of his investors also contributes something special. Our boy gets his chance at his own payback.

Anyone with questions or comments regarding "Payback" is encouraged either to email me or to connect on Twitter via @tvdvdguy.