'Lazarus Man' CS DVD: Robert Urich Seeks Answers and Confederates After Being Left for Dead in 1865 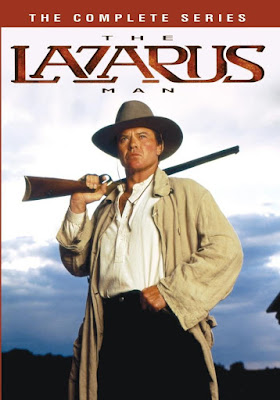 The Warner Archive February 13, 2018 5-disc CS  DVD release of "The Lazarus Man" offers a second bite at the apple regarding a creative show that you probably never saw. This TNT anthology Western drama stars seemingly Man of 1,000 Series Robert Urich as the titular amnesiac who tries to reconstruct his life after digging his way out of a grave on Halloween night1865.

The aforementioned uniqueness relates to "Lazarus" combining many great staples of television dramas throughout the years. The most prominent aspect is that of a lone wolf encountering adventure at every stop in a journey to fulfill a mission; we also get the related element of a hero who does not know his identity and battles a powerful force.

The pilot involves a young boy witnessing the man (initially) with no name crawling out of the earth in Texas; this innocent subsequently convinces his family to take in the stranger and gives him the name that he has through much of the series. Doing so makes our hero the namesake of the well-known biblical zombie.

"Lazarus" starts out with a strong story that is very relevant and true to the times. Texas being a state and the war being over does not prevent a sense that the U.S. Army is an occupying force in San Sebastian where that feature-length episode is set. Memories of Civil War battles are very fresh on both sides, soldiers are wrongfully taking resources from locals, and a Klan-like secret group is dishing out vigilante justice to southerners and Yanks alike.

Having no memory of his identity prompts Lazarus to go along with the crowd when he is identified as an Old West hitman. This results in his striking a bargain that calls for him to carry out a high profile assassination for the vigilantes in exchange for mercy for his own personal savior.

A woman who practices a profession that dates to earlier than biblical times (but who charges more than two bits for her services) apparently recognizing Lazarus from his pre-near-death days sets the action for the second episode.

The quest for identity has Lazarus traveling to New Orleans at Mardi Gras time to learn what his belle du jour knows. His more specific destination is The Palace of Dreams, where the proprietor is adept at what looks to be voodoo. This leads to a high-stakes game and a search for a woman whom Lazarus believes also has important information regarding him.

Another Reconstruction Era plot has some locals having trouble respecting the authority of a black man who represents the federal government. We additionally get introduced to both a precursor to even silent movies in a story that also shows one way in which tall tales are created.

A more timeless plot has an Old West pimp cruise the docks and distressed wagon trains comparably to his modern counterparts hanging out in bus and train stations in search of vulnerable young girls to add to their stables.

Another episode that shows that some things have not changed much in 150 years revolves around pillaging an archaeological site for ruins to sell on the black market. The Old West elements once more include at least brutal (if not illegal) conduct by the military and the conflict between Indian and white man ways.

Generals Ulysses S. Grant and George Custer are among the real-life historic figures with whom Lazarus crosses path. The former seems to be a decent sort, but the portrayal of the latter will have most folks rooting for the Indians. The underlying circumstances of leaving Lazarus for dead and the efforts to make his resurrection be short-lived.

An especially notable "Lazarus" comes mid-way in the series and is almost straight out of the Aaron Spelling '70s procedural "Vegas" starring Urich. Our hero is riding the trail alone when he learns of a prospector who seems to have chosen poorly regarding his partner. Lazarus investigating the mystery involves a heavy dose of humor and ends with awesome frontier justice.

The riding-into-the-sunset potion of this discussion is that "Lazarus" reflects both the good and the bad of the Reconstruction Era and the basic-cable series that hit the air 130 years later.

Anyone with questions or comments regarding "Lazarus" is encouraged either to email me or to connect on Twitter via @tvddvdguy.