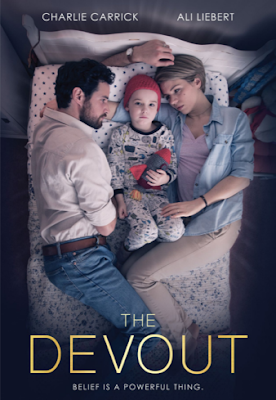 The impressive accolades for "Devout" include taking home "Best Motion Picture" and numerous other honors at the 2016 Leo Awards, which celebrate the best of British Columbia film and television. Additionally, director Connor Gaston is the recipient of the BC Emerging Filmmaker Award at the 2015 Vancouver International Film Festival.

The following YouTube clip of a trailer for "Devout" expertly conveys the eerie aspects of this odd topic.


"Devout" opens what looks like fictional home-movie footage of interviews with young children. These youngsters seem to be pretending to be someone else. The well-paced reveals throughout the film ultimately suggest that this is footage of real children discussing a past life.

Darryl and Jan are the parents of four-year old Abigail, who has a life-threatening medical condition that "Devout" does not divulge. Jan particularly is focused on making the limited remaining life of Abigail a happy period for that child. This includes ice cream sundaes for dinner.

The subtle financial assistance and other compassionate support from community members provides hope that there still are places where your friends and neighbors eagerly help you through tough times.

We additionally see Abigail initially express interest in rocket ships and have that evolve into stating that her name is the same as that of an Apollo One astronaut. This young girl repeatedly accurately discussing details of space travel generally and the Apollo One mission specifically despite it being impossible that she has that information is even more eerie.

Jan not having the same belief as Darryl that their daughter is a girl with something extra causes a rift that widens throughout the film. Darryl returning from a secret trip with a black eye and the smell of alcohol on him does not help matters.

That undisclosed mission is to see Dr. Fisher, who works with children who are believed to be the reincarnations of people who have passed away. The evidence that he presents to Darryl provides reason to believe that this is an actual phenomenon.

As is the case regarding reel and real stories of this nature, the strain of Darryl believing that his daughter is the current incarnation of a dead astronaut just as strongly as Jan is convinced that that is not the case escalates the already existing drama regarding the disease of Abigail to the breaking point.

The resolution comes surprisingly quickly and involves the same ambiguity that always is present regarding matters of faith.

Anyone with questions or comments regarding "Devout" is welcome either to email me or to connect on Twitter via @tvdvdguy.