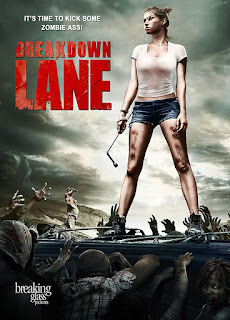 The May 16, 2017 Breaking Glass Pictures DVD release of the 2017 horror film "Breakdown Lane" adds creative twists to the dual threats of getting stuck in the desert and getting caught in a zombie apocalypse. This inadvertently untimely discussion of this film aptly comes a week before the DVD/Blu-ray release of the second season of  "Fear the Walking Dead"" and roughly a month before the S3 premiere.

Aptly named Kirby Lane is en route to a booty call when her SUV breaks down in the aforementioned desolate land. Her link (pun intended) to the outside world is NorthStar operator Max.

The following YouTube clip of the zombilicious trailer for "Breakdown" provides a glimpse of the entertaining carnage of the film.


Things are not so dire at the start, Kirby believes that a tow truck is on the way and has no reason to fear the walking dead. A subsequent conversation to which many of us can relate regarding Max telling Kirby that he is the only one to whom she can speak at NorthStar provides the initial sense that something is badly amiss.

A wrench is thrown in the first contact between Kirby and the breathing impaired. This leads to her encountering a group of survivalists who show that they are not picky eaters. Max is with Kirby throughout this and her other adventures.

The notable elements of "Breakdown" include a tough-but-kind female lead, beautiful scenery, and good production values. If you see only one indie zombie apocalypse movie this year, see this one.

Anyone with questions or comments regarding "Breakdown" is encouraged to email; you also can connect on Twitter via @tvdvdguy.