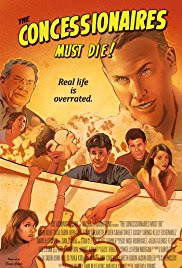 [EDITOR'S NOTE: A post on an Unreal TV interview with "Concessionaires" star David Blue will run the week of April 23, 2017.]

The April 17, 2018  Dauntless Studios VOD premiere (ahead of a DVD release) of the 2017 Stan Lee produced comedy "The Concessionaires Must Die!" shows the love of Lee for all things comic and pop culture a week ahead of a similar film with which he is associated. One difference is that this one relies more on story than on stunt casting.

The biggest homage to all things retro in "Concessionaires" is that this direct-to-VOD movie evokes strong memories of the direct-to-VHS and made-for-cable movies of the '80s. Our film is like the not-so-rare find from these venues that tells a fun story, benefits from a likable cast with good comic chops, and has good production values.

The following YouTube clip of the official trailer highlights the indie, pop culture, Millennial vibe that represents the best of fare that bypasses the multiplex.


The overall theme (ala the '90s musical-comedy "Empire Records") is of the small businessperson v. the "suits." One aspect is that this time it is really personal in a manner that is relatable to the people on both sides of comparble disputes. A very cool element is that the young cast being a closely bonded group at a dying historic single-screen movie theater is reminiscent of the unfairly maligned '80s CBS Monday Night failedcom "The Popcorn Kid."

A slimmed-down David "Eli" Blue ("Stargate SGU") stars as veteran snack bar jockey Scott Frakes. The theater is the site of his coming-of-age and projectionist Jon Dorn is a surrogate big brother if not father. The other significant relationship in the life of Scott was with his grandfather (Lee), who infected him with his love of comics and provided the legacy of a collection of highly sought-after editions.

Scott additionally is obsessed with all things pop culture to the extent of annoying one and all by repeatedly sharing a theory regarding "Magnum, P.I." A "Psych" vibe comes in via co-worker/best friend/sidekick RJ being a black guy with a shaved head and a geeky anxious nature.

The rest of the crew includes former child star/current drug addict Ashley and theater owner/cool boss Gabby. She inherits the theater and wants to honor the independent spirit of her father but also is tired of the struggles related to running that dying business.

Self-proclaimed nemesis of Scott/token bad guy Derek is leading the effort to purchase the theater while also trying to fully frakes up the life of Scott. The reveal regarding the offense that triggers that hatred reflects the incidents in our lives in which someone inadvertently seriously wrongs another to the extent of prompting a long-term grudge that remains a mystery to the offender.

Much of the ensuing wackiness relates to the antics of our 20-somethings and the malfeasance of the customers. We get the nerds who violate the no costume rule, the couple who cannot keep their hands or their lips off each other, and the tweens who repeatedly attempt to sneak into the theater. The manner in which the projectionist handles the kids is one of the best scenes and makes a case for naming "Concessionaires" "Jon Dies at the End."

Another good scene is a flashback between Lee and a young teen version of Scott. Lee seems to really be playing himself, and it is nice to see such a supportive parental figure play it straight in a comedy.

Much of the last half of the film centers around Scott taking steps to evolve as a person and to determine what really is important in his life. This involves making a large sacrifice that he does not consider as big of a deal as his friends and co-workers.

The final confrontation is nicely understated and includes a good twist. It further is nice to see a relatively believable happy ending. Even more joy comes regarding the hilarious outtakes that indicate that the cast is friends in reel and real life.

Anyone with questions or comments regarding "Concessionaires" is encouraged either to email me or to connect on Twitter via @tvdvdguy.