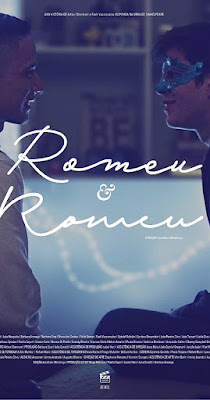 The modern touches extend beyond the star-crossed lovers of Verona, Brazil being two 20-something guys from families that have battled since a 1950 gay romance between young men from each family prompted murder and other mayhem. The Greek chorus consists of fierce drag queens, and the confidante of the boys is a highly outspoken maid.

The following YouTube clip of the "Romeu" trailer provides an entertaining primer on the series.


Romulo Campelo overall is an ordinary 20-something guy with the exception of being an early victim of a form of a Parkinson's Disease. Other drama relates to his intrusive mother Valeria aggressively trying to get him to reunite with handsome young (but not Jewish) doctor Patrick whom he used to date and who still has feelings for him.

On the other side of the equation is Ramon Monteiro; the challenges of this closeted gay boy extend beyond having a highly homophobic father to desiring an acting career despite his father having no regard for that profession.

Our boys meet when Ramon crashes a masquerade party for the birthday of Veleria. This also sets the stage for Patrick to connect with Maurcio from Team Monteiro. Ramon ex-girlfriend Luana hooking up with Romulo brother Thales is not the end of the crossing of lines among the post-adolescents around whom this series centers.

More drama centers around the conflicting views of our main boys regarding homosexuality than does around the probability of actual bloodshed if their families learn about their youngest generation sleeping with the enemy.

A scene in a late S1 episode has two of our secret lovers run into each other under highly compromising circumstances.

The theme to which many young (and not-so-young) gay men can relate is that not every boy who likes other boys is ready to let the whole world know about that aspect of his life. The broader theme in both "Romeu" and the real world is the range in significance of a man having sex with another man and whether both guys have the same feelings regarding that activity.

All of this shows that not much has changed since the debut of "Romeo" at the Globe Theater.

Anyone with questions or comments regarding "Romeu" is encouraged either to email me or to connect on Twitter via @tvdvdguy.