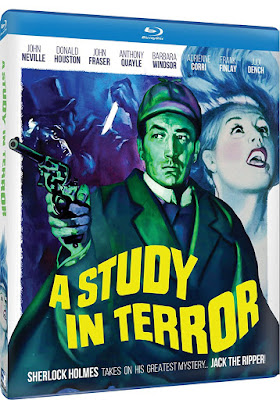 The must-see Mill Creek Entertainment April 3, 2018 Blu-ray release of the 1965 Sherlock Holmes mystery "A Study in Terror" is part of an April Creek Holmes homage. This also is the release date of the (soon-to-be-reviewed) Creek DVD of the  way-cool 1999-2001 animated series "Sherlock Holmes in the 22nd Century."

Highly versatile actor John Neville IS Sherlock Holmes in this film version of the common fan (rather than slash) fiction that pits him against fellow Victorian notable Jack the Ripper. This real-life serial killer preys on the ladies of the evening who work the street corners of the red-light district of Whitechapel for the British equivalent of two-bits.

The well-filmed highly atmospheric (which look great in Blu-ray) early scenes shift between comical ones that show the Diary of a 19th Century Call Girl and POV shots that depict the titular angst as the Ripper does his thing. These scenes also establish that "Terror" largely succeeds in staying true to the era of the film.

As is almost always the case in Holmes tales, the world's first consulting detective enters the scene in the flat that he and partner to an ambiguous degree Dr. John Watson share at 221B Baker Street. A late-night exclamation by Watson while reading the newspaper prompts Holmes to act in the manner that makes him the most annoying roommate ever. He shows off his extraordinary deductive abilities rather than allowing his roomie the satisfaction of sharing the news of the sensational killing of a pro.

Good humor ensues when Holmes declares the element of the murder that warrants his attention. The arrival of a not-so-mysterious package further seals the deal.

Debatable deduction soon puts our dynamic duo on the trail of (former?) working girl Annie Chapman. The latest reports regarding this pretty woman include that she is married to nobleman/medical student Michael Osborne.

The ensuing investigation reveals the scandal involving nobility, blackmail, political scandal, and betrayal that particularly are trademarks of England of that era.

As is the case regarding a good mystery that is set in any era, the final 30 minutes rapidly build to the climax. One satisfying moment involves Mr. Smarty Pants missing important evidence that a true master of deduction would have uncovered. It additionally is amusing that his case goes up in flames in a reputation-threatening manner.

The final analysis is that Oscar-nominated director James Hill hits all the right notes in "Terror." The pacing and acting are very good, and he shows perfect instincts regarding injections of humor and other distractions. One especially good element is including bits in which marveling at feats of Holmes is akin to the dolts of Metropolis who do not realize that Clark Kent is Superman.

Anyone with questions or comments regarding "Terror" is strongly encouraged either to email me or to connect on Twitter via @tvdvdguy.