'Giant': Historian Don Graham Writes About The Making of a Legendary American Film 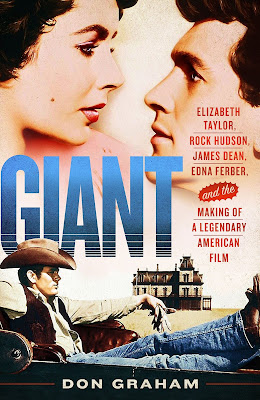 A desire to timely review the St. Martin's Press April 10, 2018 hardcover and Kindle releases of Giant: Elizabeth Taylor, Rock Hudson, James Dean, Edna Ferber, and the Making of a Legendary American Film requires basing this post on 3/4 of the book. The apt pause in this reading is the Hollywood royalty and the rest of the cast and crew boarding a train from the challenging location shoot in the small Texas town of Marfa to Los Angeles.

The strongest endorsement of this book is that it it will make you want to watch "Giant" and the Dean films "East of Eden" and "Rebel Without A Cause." The Unreal TV DVD library includes the good three-film DVD release of these.

University of Texas at Austin English professor Don Graham demonstrates his status as the "premier scholar and critic on Texas literature, films, and pop culture" regarding the scope of Giant. We get copious fascinating insight into the stars in front of and behind the camera, including their conflicts that reflect the dynamics of any family. He further puts the making of the film in the context of society-at-large.

Graham presenting the material well without dumbing it down indicates that he is a great professor, he is asked to please not grade this review.

The 1956 film "Giant" is one of at least two Warner films that clearly inspire the CBS primetime soap "Dallas." The other is the reviewed 1960 Robert Mitchum epic "Home From the Hill."

"Giant" is based on the "ripped from the headlines" Edna Ferber novel of the same name that tells the tale of Texas rancher Jordan "Bick' Benedict, Jr. (Hudson) bringing back a stallion and a filly when he travels to Maryland (Virginia in the novel) to buy a stud horse and falls in love with the daughter of the wealthy owner of that noble beast. Elizabeth Taylor plays Leslie Benedict, who experiences intense culture shock on moving to her ginormous house on the prairie. Culture shock for Taylor while making the film includes Dean openly commenting that she looks good enough to eat.

The third side of the triangle in the film and the book is white trash redneck Jett Rink (Dean), who experiences sudden wealth roughly halfway in the film. Demonstrating the extent to which the upward mobility of Rink reflects the power shift in Texas in the era of the film is one of many examples of Graham utilizing his extensive knowledge of Texas.

Early portions of Giant focus on Ferber and director George Stevens collaborating (and arguing) regarding adapting the novel to a sceenplay,  One passage with particular relevance discusses a clash regarding the amount of exposition in scene in which Bick gives his son (Dennis Hopper) a hat that is too large for him. Anyone watching the movie without even being aware of the book should agree that Stevens (who wins a Best Director Oscar for "Giant") correctly argues that that scene should not have any dialogue.

This makes compelling reading and evokes the sentiment of a modern author who comments regarding an film adaptation of his novel that he likes the movie but wants to know when the study is making one based on his book.

The section of Giant on the casting of the film provides good context for discussing the three stars. Graham shows good instincts in putting much of this focus on the boys because their backgrounds are more interesting than that of Taylor. She has her own issues then and later in life but has comparatively charmed personal and professional lives.

The study of Hudson is of particular personal interest because of the numerous parallels with fellow '50s matinee idol Tab Hunter. The most prominent similarity is both closeted homosexuals being the discovery and creation of openly gay agent Henry Willson. Both the Graham book and copious Hunter material discuss how Willson demands sexual favors from his stable of studs in exchange for stardom. Further, the book indicates that Hudson is as gracious as your not-so-humble reviewer knows Hunter to be.

One parallel that Graham does not mention is that Hunter picks up on a Method technique that Giant discusses Dean using. This trick involves an actor who is not the primary focus of a scene playing with a belt buckle or doing other small business to attract attention to him or her. We learn that this drives Hudson crazy when filming with Dean.

Dean also steals the show regarding the book. It proverbially delves into the speculation surrounding the actual nature of his sexuality. This includes discussion of S&M activity that earns this rebel the nickname "The Human Ashtray" among his intimates.

Other Dean topics includes his obsession with Marlon Brando that really comes through in "Rebel Without a Cause," the extent to which he is sullen for the sake of being sullen, and his publicly urinating on set before  "Dallas" star Larry Hagman adopts that practice during his years on "I Dream of Jeannie."

A less titillating but equally intriguing portrait of Dean in Giant are photos that depict his actual diminutive stature and wearing the glasses that Graham repeatedly states that this near-sighted star requires to see. Alas, the book does not include pictures of Dean engaged in his habit of wearing just tighty whities, a cowboy hat, and cowboy boots in the house that he occupies while filming on location.

The most compelling part of the Dean portrait is many of us seeing ourselves in this man with a tortured past who does not work or play well with others. A personal friend in the business whom Dean definitely would have liked expresses understanding of this by stating that he realizes that there a re reasons that difficult artistic people are difficult. In the case of Dean, those reasons include sometimes having better instincts than Stevens.

However, Stevens gets the best quote in at least the currently read portion of the book. We learn that his frustration working with Taylor on a prior movie leads to him very publicly and loudly declaring during that project that she is not filming 'Lassie Comes Home to a Separate Place."

Other topics include the long and successful history of adapting other Ferber novels into films, such as the reviewed "Showboat," and the typical battles between the bean counters and the filmmakers. This is not to mention the reactions of Texans to "Giant" and other insider information to which Lone Star notable Graham is privy.

The epilogue to these thoughts is that Giant greatly enhances the experience of those of us who have seen the film, makes "virgins" want to watch it, and reinforces the sense that a film set is like any other workplace with the exception of peeing in the reception area not being grounds for termination.

Anyone with questions or comments regarding anything in this post is strongly encouraged to email me; you also can connect on Twitter via @tvdvdguy.