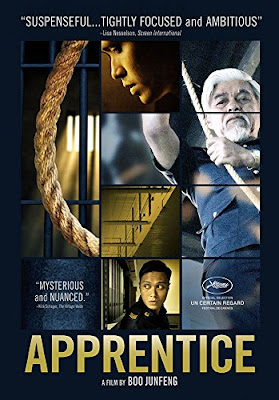 This belated review of the Film Movement May 2017 DVD release of the 2016 Asian drama "Apprentice" is more timely than it seems. This DVD is part of a December 2017 Movement three-film release to promote the fantastic Film of the Month Club of that distributor of international indie flicks. The other two DVDs are the particularly good (reviewed) "Bad Lucky Goat" and SPECTACULAR (also reviewed) "Glory."

The following YouTube clip of the official U.S. trailer for "Apprentice" highlights the drama and the character study elements of the film.

The home life of Aiman consists of a stressful co-habitation with his sister Suhaila; we soon learn that Aiman cannot even go to the bathroom in peace. For her part, Suhaila has a serious boyfriend with strong ties to Australia.

The other piece of the equation is that the father of the siblings is a convicted murderer who still casts a shadow over them roughly 20 years after his execution.

The portion of "Apprentice" that focuses on Aiman helping prepare for the execution of a prisoner has several fascinating aspects. The most general element is providing both insight into this procedure and putting a human face on everyone involved. The more specific part of this is Aiman trying to learn more about the experience of his father leading up to his execution and related to the actual hanging.

This character study of this young man takes a dramatic turn when the past threatens to completely destroy his future. Although the resolution of this is not unduly surprising, it comes about in a very tense manner.

Although the story of Aiman alone provides good fodder for a film, the ambiguity that runs throughout "Apprentice" is what makes it Film Movement worthy. Examples include not knowing much about the dynamic between Aiman and Suhaila and also not being sure about every reason that Aiman wants to learn about conducting an execution.

As always is the case regarding Club selections, Movement pairs "Apprentice" with a well-matched short film. "The Casuarina Cove" is a serious-toned mockumentary that is based on actual events. The central character is a former military officer who is making a documentary about his experience (including the impact of his relationships with the father and his grandmother) being arrested after connecting with a man in a well-known gay cruising area. The impact of this incident includes media coverage of it.

Both films are prime examples of all fictional Movement offerings in that they easily can be remade word-for-word and shot-for-shot in the United States and still make perfect sense. These offerings having a live-stage vibe is another Movement trademark.

Anyone with questions or comments regarding "Apprentice" and/or "Cove" is encouraged to email me; you alternatively can connect on Twitter via @tvdvdguy.