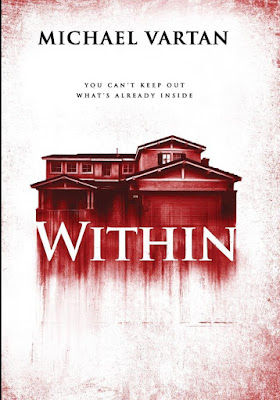 The following thoughts regarding the Warner Archive October 3, 2017 DVD release of the 2016 horror film "Within" continues a series of reviews on recent Archive Halloween-themed Blu-rays and DVDs. These include the John Landis horror-comedy "Innocent Blood," the '60stastic scifi film "The Green Slime," and the Manson family docudrama "Wolves at the Door."

The following YouTube clip of the "Within" trailer" highlights the creepy occurrences and building terror that make the film apt for All Hallow's Eve.


Writing about this film with plenty of creepy suspense is tough because the aspect that makes it the most frightening also is the biggest surprise that should not be spoiled in any manner. Much of this fear relates to the fact that it could happen to anyone.

"Within" centers around remarried widower John Alexander (Michael Vartan of "Alias" and "Bates Motel"), his second wife Melanie (Nadine Velazquez of "My Name is Earl" and "Major Crimes"), and his teenage daughter Hannah. The family moving into a murder house to facilitate John taking a new job after prolonged unemployment provides the "fresh start" element that is common in films of this nature.

John being incredibly irate/concerned about Hannah holding a party at their old house and being arrested for underage drinking is reminiscent of the "very special episode" of "Saved by the Bell" in which Jessie becoming addicted to caffeine pills causes great angst.

The unhappy Hananh quickly becomes the focus of the weird goings-on in the new abode. These include the pulling covers off her as she sleeps, shadowy figures, disembodied whispers, a closet door slowly opening, etc.

The circumstances of the aforementioned killing contribute an additional creep factor. Online research reveals that the prior occupants were a father, his wife, and their teen daughter until an apparent suicide and double murder resulted in the house going on the market. Of course, closer inspection of a photo of the then happy clan in front of their house reveals a menacing presence staring at them from a second-floor window.

Discovering the nature of the threat roughly halfway through "Within" does little to reduce the suspense; the malevolent presence still is malevolent and present. The fact that a sense of security regarding going back in the living room is false also does not reduce the impact of the film.

The biggest fright comes just before the closing credits; this scare reinforces the aforementioned observation that "Within" is unsettling because the events of the film could happen to you.

Anyone with questions or comments regarding "Within" is encouraged either to email me or to connect on Twitter via @tvdvdguy.