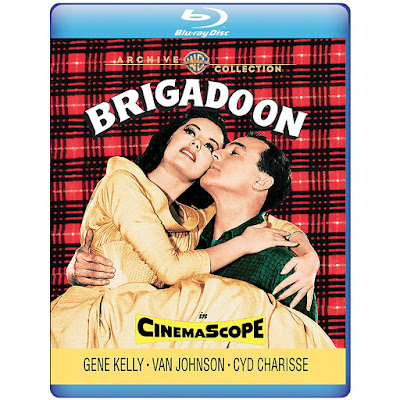 The Warner Archive September 26, 2017 Blu-ray release of the all-singing all-dancing 1954 CinemaScope Gene Kelly-Cyd Charisse musical extravaganza "Brigadoon" is so clear in picture and sound that it the next best thing to seeing the original live-stage Broadway production of this Lerner and Loewe classic (and also to being in love). Director Vincente Minnelli does the musical heritage of his wife and his daughter proud, and choreographer Kelly shows that he is a master of Loch Dance.

The best humor in this delightful romp relates to a hilarious similarity to the 1980 Kelly-Olivia Newton John musical fantasy "Xanadu." Both films have the Kelly character bond with a beautiful magical creature from a fantasy world. The hilarity relates to "Brigadoon" seamlessly fitting into the "Xanadu" theme song. An example is "Now we are here; in Brig-a-doon."

The following YouTube clip of the theatrical trailer for "Brigadoon" offers a tease regarding the grand spectacle that awaits.


"Brigadoon" opens in traditional musical-theater style with the residents of the titular small Scottish town awakening to a orchestral score and then taking to the streets in a manner very reminiscent of the Disney version of "Beauty and the Beast" to sing and dance about their daily lives.

Kelly and Van Johnson do their best Hope and Crosby impression in the form of their respective Manhattanite characters Tommy Albright and Jeff Douglas being on the road in Scotland when a hunting trip into the woods becomes a quest to return to civilization.

These hungry men are are so starving that the prospect of breakfast takes precedence over their astonishment at seeing a village that is not on their map appear out of the mist.

These early scenes further show the turmoil at the Campbell home regarding this being the wedding day of Jean Campbell to Charlie Chisholm Dalyrmple. Younger daughter Fiona Campbell (Cyd Charisee) lamenting in word and song about never falling in love at the same time that essentially runaway groom Tommy is discussing his waning interest in the fiancee whom he left behind removes any doubt that this pair soon will be singing and dancing in a field of heather.

An amusing aspect of this is that thoughts about the stereotypical frugality of Scots coincides with Campbell father Andrew stating that he wants to show the wedding guests hospitality but does not want to provide more food and drink than that requires.

Tommy and Jeff meet Fiona at the outskirts of town and soon find themselves enjoying the hospitality of Charlie. The townsfolk wearing 18th century garb is an early (but dismissed) indication that the pair is not in New York anymore.

Finding concrete evidence that something odd is afoot brings the visitors to village elder Mr. Lundie, who fills them in on the lore of the village regarding which the audience already has some sense. One kicker is that anyone who is in the village when an impending grace period begins is stuck there for an extended stay. The other rule is that any villager who strays beyond the borders of Brigadoon ends the party for everyone else.

A nice aspect of this is that the core of the lore revolves around literally protecting the community from the evils of the outside world; a realistic aspect of this Utopian fantasy is that one must sacrifice a great deal so that many may live in Paradise.

An important aspect of this is that Tommy must make the tough choice of whether to make an enormous commitment to Fiona after only knowing her for a few hours or going back to New York at the cost of relinquishing any hope of ever seeing her again.

This being a post-war Broadway play, viewers can be assured of an 11th hour miracle that provides the folks who deserve a happy ending that desired outcome.

The special features include deleted scenes and several musical numbers.

Anyone with questions or comments is strongly encouraged either to email me or to connect on Twitter via @tvdvdguy.