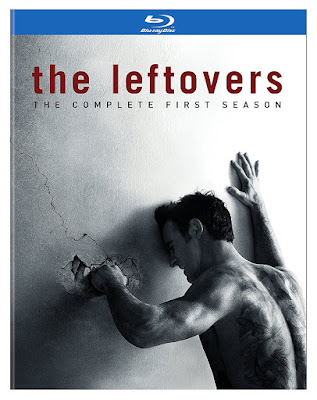 October 14, 2011 being when 2-percent of the population vanishes in the literal blink of an eye in the HBO series "The Leftovers" makes the sixth anniversary of that event an apt date for this review of the Warner Prime Blu-ray release of S1 of that series. A review of the Prime S2 BD release is the next in this series leading to a post on the Warner Archive October 10, 2017 S3 BD release.

This show about those of us who are left behind is from Damon Lindelof of "Lost" fame and author Tom Perrotta (who is the Nick Hornby of American literature) based on the Perrotta novel of the same name. Folks who are familiar with the wonderfully cynically comic Perrotta novels that include "Election, "Joe College," and "The Abstinence Teacher" are in for an equally entertaining but darker ride this time.

The following YouTube clip of a trailer for S1 expertly summarizes the lore of "Leftovers" and illustrates the film-quality cinematography that looks great in BD.

The pilot opening roughly five minutes before the aforementioned dramatic rapid rapture and shifting three years ahead in the wake of that event is an early indication that this is a Lindelof joint. We meet Mapleton, New York police chief Kevin Garvey (Justin Theroux) come across a man killing a dog only to quickly leave the scene.

We then learn that mayor Lucy Warburton and civic leaders are planning a ceremony to mark the third anniversary of the culling. This also establishes that Kevin and Warbuton are at odds. The primary lore contribution of a planning sessions is that we learn of the strong and silent "GR" (later revealed to stand for "Guilty Remnant'), which is expected to be a disruptive influence.

A touch of "American Beauty" enters the picture in the form of delinquent teen daughter Jill having ubiquitous friend Aimee doing her best to equally taunt and tempt Kevin. We further learn that these girls and the bad boys with whom they hang are highly symbolic feral beings whose activities largely center around drinking and doing drugs in the woods. Their reckless acts include perverse sacrilege and a dangerous way of honoring the presumably ascended member of their group.

Meanwhile, son Tom Garvey spends much of the season on the run with a fellow cult member who allegedly is very important to the founder of that organization. This role of protector requires that Tom prove his faith in an extreme manner.

Kevin's wife Laurie (Amy Brenneman) is now a GR member and at odds with her spouse and her daughter. A particularly dramatic scene between Jill and her mother leave absolutely no doubt regarding the feelings of the former about the latter.

The other primary family in the "Leftovers" 'verse is minister with a mission Matt Jamison (Ninth Doctor Christopher Eccleston) and his sister Nora Durst; Nora, who works for the government agency that conducts interviews that seek common characteristics of the ascended) is one of the more fascinating characters in this group of interesting individuals. An episode that centers around Nora attending a professional conference is one of the best in the season.

The outstanding penultimate S1 episode (which has Lindelof written all over it) shows how Nora lost her husband and her two children in the purge. This episode-long flashback begins in the period leading up to the mass disappearance and continues through to the "leftovers" reacting to seeing their loved ones and others whom we meet in this outing vanish.

Another striking aspect of this is seeing Jill the delinquent as a happy geeky tween science nerd and dark sullen Tom freshly scrubbed and always broadly smiling and joking as he bounces around like a puppy on coke.

Again in true Lindelof style, S1 builds to a dramatic climax. A GR stunt pushes the already strained tolerance of the gen. pop. beyond any reasonable limit but does lead to both a family reunion and a clear dividing of lines for that clan. A cliffhanger that is unrelated to that interaction ensures big changes for S2.

The messages in this medium include the universal frustrating search for answers to the big questions and what occurs when fanatics with clashing beliefs must closely co-exist.

The copious BD special features include a "making of" film and a separate extra consisting of Lindelof and Perrootta discussing S1.

Anyone with questions or comments regarding "Leftovers" is encouraged either to email me or to connect on Twitter @tvdvdguy.