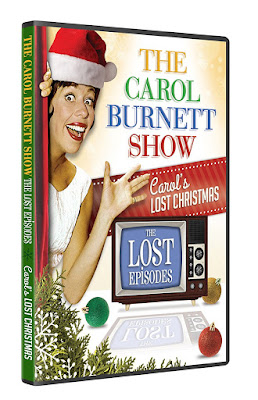 Time Life awesomely does it again regarding the October 24, 2017 DVD release "The Carol Burnett Show: Carol's Lost Christmas." This collection of three episodes of that long-running '70s variety series comes on the heels of the four-disc Time Life (Unreal TV reviewed) "Best of " Burnett 50th Anniversary edition release. "Christmas" includes three holiday-themed episodes that have not been seen in more than 40 years.

The "Christmas" set opens with an S1 episode that reminds current fans of the greatness of "Burnett" and introduces newbies to most elements that warrant that praise. The specialness of this one begins with the guests being comedian Jonathan Winters and actress/singer Barbara Eden. Winters represents the A-List caliber of Burnett guests and the equally elite Eden illustrates Burnett especially loving stars who both can do comedy and perform musical numbers.

Eden shining in a scene in which she channels "Jeannie" to entrance "Burnett" announcer Lyle Waggoner shows her comedic side; a later song-and-dance number demonstrates the desire of Eden (and her mother) to be a musical-comedy star that she discusses in a (sadly lost) vintage interview with your not-so-humble reviewer.

Improv. master Winters steals the show as a boozing Santa in a faux interview in a segment in a "V.I.P." sketch that features Harvey Korman as an interviewer. The humor from a clearly missed cue is pure Burnett. Winters performing a political monologue about dolls is pure hilarity.

Winters and Korman later team up again in a mockumentary about prisons. Winters as an unconventional warden is a laugh-a-minute; a surprise guest later in the sketch is a special bonus.

Speaking of special guests, a big-name appearing in character surprising Burnett and the audience is a prime example of such versions of Easter eggs in the series; a similar cameo in the third episode in the set is another stocking stuffer.

The guests in the aforementioned third episode and the second one in the set include comedian Garry Moore, who is the former boss of Burnett on his own variety show. The pair fully relive old times in the sketch "The Trial of Mrs. Peter Piper" that is a Neil Simon piece that premiered on the "Moore" show.

Burnett both having the Bob Mitchell Singing Boys perform and interacting with two of the lads (who show that boys will be boys) demonstrates both her interest in highlighting lesser-known talent and giving the audience a chance to know them.

All of this amounts to more than two hours of a show that was "appointment TV" for most of the '70s and that aces the test of time.

Anyone with questions or comments regarding "Burnett" is strongly encouraged to email me; you alternatively can connect on Twitter via @tvdvdguy.