'1944' DVD: 'Dunkirk' Style Tale of WWII Estonian Soldiers on Both Sides of Conflict 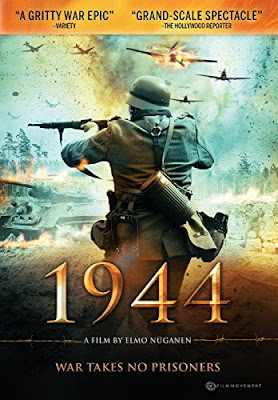 The diversity in subject and nationality regarding the movies in the catalog of New York-based Film Movement is very prominent regarding the October 3. 2017 DVD release of the 2015 drama "1944." This WWII epic evokes strong thoughts of the summer blockbuster film "Dunkirk." Purists can watch the film in the original Estonian with English subtitles; folks choosing to not do so can watch a version that is dubbed well in English.

The press materials for the DVD release share that "1944" is the highest grossing ever Estonian film in Estonia; this release adds that the film is Estonia's entry for the 2016 Best Foreign Film Oscar.

The exposition at the beginning of "1944" explains that Soviet control of Estonia in 1939 results in forcing young Estonian men to fight in the Soviet army against the Germans; the Nazis subsequently obtaining control of the country leads to young Estoinians joining their forces.

The action begins during the Battle of the Tannenberg Line; Estonian members of the SS literally are entrenched as they try to fend off the Soviets. The footage of life in the trenches and of the raging warfare is as good as that of any Hollywood film on the subject.

Other depicted harsh realities of war during the battle include reinforcements being twin brothers with great concern for each other, the Estonian soldiers openly having great disdain for Hitler, and sudden combat deaths.

The shift of focus to a Soviet platoon enhances the brother against brother civil war aspect of 1944. Most foot soldiers feel understandablly compassion toward their peers who involuntarily find themselves on the other side, but the command structure lacks any sympathy in that regard.

The most dramatic way in which the two worlds collide is Estonian soldier on the Soviet side Juri Jogi visiting the sister of a dead Estonian soldier on the German side. The two increasingly bond despite both Jogi and the audience knowing that the sister has plenty of reason to hate him. This fully comes together for the audience at the end of the film

The angst related to Estonians battling Estonians culminates in a scene that shows the horror of the situation and the overall atrocities of war.

The especially well-matched bonus short that Movement includes this time is the fantabulous animated French film "The Two Lives of Nate Hill." This oh-so-clever movie is completely done in split screen and shows the apparent impact of a Cesarean birth as opposed to a traditional delivery.

The Cesarean baby is a minor-league psycho who does not make much of life personally or professionally; each stage in the existence is depicted alongside the baby who comes into the world in the usual way. He is good kid who enjoys personal and professional success as an adult. The most amusing scenes depict a sequence of events that are hilarious to the audience and tragic to the affected characters.

The best part of these films individually and as a unit is that they show that Movement is an expert at presenting the sublime, the ridiculous, and the sublimely ridiculous.

Anyone with questions or comments regarding "1944" or "Hill" is strongly encouraged to email me; you alternatively can connect on Twitter via @tvddvguy.