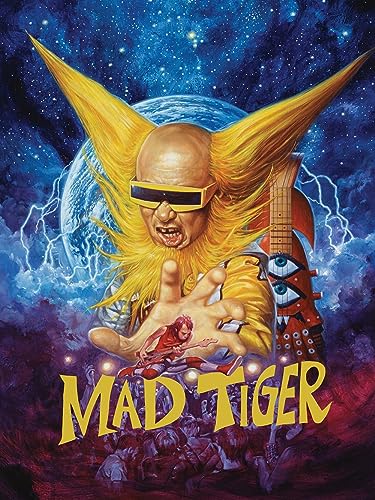 Uber-fantabulous New York-based international film distributor Film Movement makes an artful combination of an outrageous concert tour film and a more traditional documentary available regarding the July 5, 2016 release of "Mad Tiger." This genuine art-house film divides its focus the Japanese punk band Peelander-Z (from Planet Peelander) and the personal crises associated with band member Red (Kotaro Tsukada) making bandmates Yellow (Kengo Hioki), Green, and Pink see red to varying degrees by leaving them behind after 15 years. This separation hits leader/good friend Yellow especially hard. One spoiler is that Red, unlike a certain naughty Power Ranger, is not banished to a peace conference.

Before delving more deeply into the colorful lives of these musicians/theatrical performers more deeply, it is worth noting that "Tiger" is an awesome follow-up to the recent (Unreal TV reviewed) Movement documentary "The Theory of Obscurity" on the highly bizarre musicians/performances artists who comprise the group of that name,

It is also worth noting at the outset that the exceptional nature of the extras in the two-disc set "Tiger" deserve special mention. Disc One consists of the film and music videos, which include the apparent Peelander anthem "Ninja-High Highschool." Disc Two has deleted scenes and the complete final concert of Red.

"Tiger" opening with an interview with the highly eccentric Yellow discussing his leadership creates anticipation that the film will mostly center around him. The announcement early on that Red is leaving (but not breaking up) the band introduces that prominent element of the film.

Although the parting of ways does not result from artistic differences or similar conflicts, it does create discord with Yellow. Manifestations of this include replacement member Purple having a hard time creating harmony and Yellow not reacting well to Red attending a post-break-up concert.

The focus on Red largely relates to his post-Peelander life; this includes his efforts regarding the venture that prompts the change. The coverage of Yellow is a bit deeper and includes coverage of the soul-searching that follows the major disruption in his life. His challenges include creating a "happy happy" environment at a performance when his mood is anything but gleeful.

The universal themes that add depth to this highly entertaining film about bizarre performers are that close friends ending a professional partnership can have an intense ripple effect, that the public faces of performers often do not reflect their true selves, and that we all must follow our bliss and seek inner peace.

Anyone with questions or comments regarding "Tiger" is encouraged to email me; you can also connect on Twitter via @tvdvdguy.