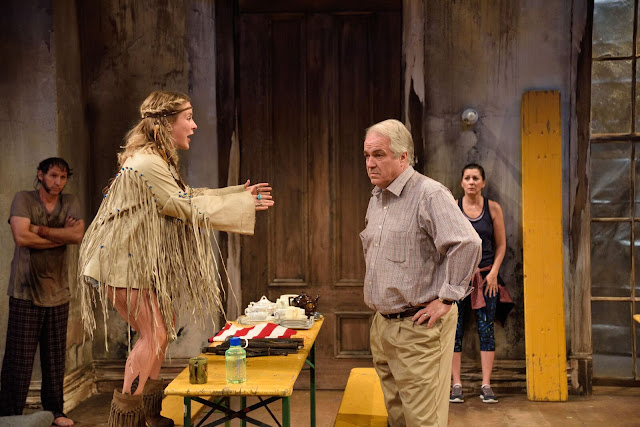 Personal last-minute technical difficulties that have absolutely nothing to do with the Trinity Repertory Company, which is the State Theater of Rhode Island, in Providence are behind missing the opening night of the live-stage production of the modern comic-drama "Appropriate." This post on the production itself is designed to be a placeholder until a performance can be watched and a review post written. The play runs through November 6, 2016.

The "Appropriate" theme of past family trauma coming back to haunt a clan ala Henrik Ibsen or Tennessee Williams makes it a great choice for the "Ghosts of the Past, Dreams of the Future" motif of the 53rd season of Trinity. A superfantabulous (Unreal TV reviewed) production of a musical version (complete with psychoanalysis) of "Beowulf" kicked off the season. Barring any additional technical difficulties, Unreal TV will attend the November 5, 2106 opening night of what is sure to be a creative staging of "A Christmas Carol." The post on that one is scheduled for November 7, 2016.

The press materials for the Obie-winning "Appropriate" describe it as a "biting comic-drama" about estranged relatives returning to their dilapidated Arkansas estate after the death of the family patriarch. This synopsis adds that finding a "gruesome relic" leads to "an escalating series of shocks, showdowns, and revelations."

The following brief YouTube clip of the "Appropriate" production provides a glimpse of the cast.


In addition to perfectly fitting in the "ghosts" theme of the current Trinity season, "Appropriate" seems to be a good member of the modern genre of artistic indie dysfunctional family dramedies. Unreal TV favorites have been the DVD releases "Take Me to the River" about a child molestation charge during a family reunion stirring up old resentments and the similar "The Automatic Hate" about decades-old family trauma resurfacing and threatening to reoccur.

The reasons that these productions succeed artistically and are relatable is because they reflect the reality of the lives of many of us. These histories make most family gatherings seem like "Who's Afraid of Virginia Woolf" the home game.

The actions so your until-recently London-dwelling (and recently divorced) sister of your not-so-humble reviewer have earned her the nickname The Wicked Witch of the West End. This is aside from her husband being fined for violating securities fraud. Nelson family history also includes one aunt paying off the police to cover up a serious crime by the manager of her factory in a developing nation and a marriage to another aunt resulting in an uncle essentially being disinherited.

Please stay tuned for a review of "Apprropriate."