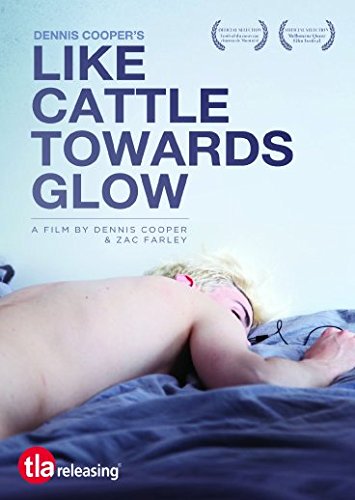 The IMDb summary of "Cattle" perfectly describes it as "troubled gay youngsters who attempt to resolve their psychological issues through bizarre fetish play or sinister self expression."

"Cattle" opens with an partially blocked view of an innocent-looking twink pleasuring himself. Great shock value comes both in the view soon becoming much less blocked and showing what this skinny and somewhat short boy is packing. Suffice it to say, he is very well equipped for his also soon revealed job as a rentboy.

The action soon turns to said "professional" showing up for a job at the home of a peer who is an "amateur." The sensitivity of the former and nervousness of the latter makes for good cinema and provides a setting for the "client" to explain the penitent nature of his reason for seeking this service. There is little chance that, unlike some young actors in releasing films, either boy will ever receive an Oscar nomination. However, each plays his part fine.

Things get particularly weird when they move into the bedroom. The necroerotic elements and literal fumbling make sense in the context of the story.

The next scene involves wildly arousing performance art. The show begins with an early 20s-man baring his soul about his intense teen dramas only to be brought to the floor and baring his butt. This leads to his becoming sandwiched while doing his best to continue expressing his angst despite having a full mouth.

The third chapter also features teen boys at play. This time it is in the woods and backyards of an apparent suburban community. Like the films that precede it, the coupling has much more to do with psyches than physical desire. The fully flaccid bottom this time aggressively begs his buddy to help him for reasons that are far from the obvious.

The fourth presentation is more of a modern sci-fi fable in that it has a woman in a control room using a drone and other surveillance to watch a young man who is living in a bunker in a beach. The spoiler this time is that boy mostly limits his baring to his soul this time. Like his predecessors in "Cattle," this boy's life reflects his prior difficulties.

Cooper waits until the fifth and final "chapter" to fully reveal the significance of his title. This one also both provides the most surprises and greatly exceeds the mayhem of the four that precede it.

The ensuing action clearly shows the primal nature of sex and that lust trumps political philosophies every time. The manner in which the tables get turned provide more cynical fun.

The final analysis regarding these psychological tales from the crypt is that they highlight both the strong emotional context of sex (especially regarding one boy penetrating another one) and the fact that we are all dirty little monkeys who respond to both the sexual and violent aspects of these images. The better news is that most of merely find such depictions moderately intriguing.

Anyone with questions or comments regarding "Cattle"is encouraged to email me but please do not read much into that invitation. You can also connect on Twitter via @tvdvdguy.