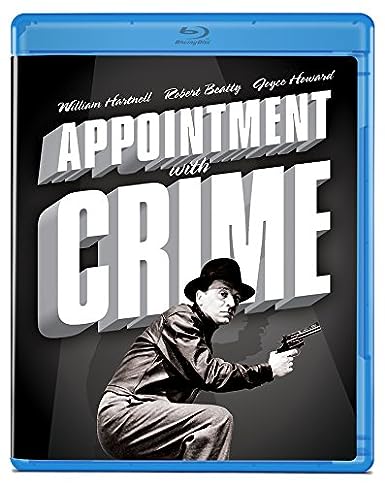 The Euro-centric focus of the June 21, 2016 Olive Films Blu-ray (BD) releases extends beyond the '60s comedies "I'll Take Sweden" and "If Its Tuesday, This Must Be Belgium" (as well as the May 2016 BD release of the Paris-based comedy "French Postcards") to encompass the the awesome 1947 British gritty noir film "Appointment with Crime." The notable aspects of "Crime" for modern audiences include that it illustrates the Olive motto "Cinema Lives Here" and has William Hartnell, who is the first titluar Gallifreyian of the "Doctor Who" franchise, as patsy with a chip (but no fish) on his shoulder Leo Martin.

The following YouTube clip of the opening moments of "Crime" illustrates the artful use of black-and-white and avant-garde camera angles that provides cinephiles additional enjoyment.


The opening scenes center around legitimate businessman Gus Loman coercing two-bob loser Martin into pulling what he advertises as an easy smash-and-grab. Things very quickly going awry and Loman literally leaving Martin holding the bag and Martin subsequently becoming a guest of His Majesty the King sets the stage for the primary action.

On being released from his unfortunate incarceration, Martin commences a revenge scheme that is designed to kill two birds with one stone. This leads to an equally clever series of events that are up there with "The Maltese Falcon" and other better-known noir classics.

The group of "usual suspects" extends beyond the aforementioned stock characters of the crime boss and the loser who falls victim to his callousness. Transplanted Canadian Detective Inspector Rogers fills the role of the dedicated gumshoe who knows that Martin dunit but is having trouble proving it, Gregory Lang is the respectable art dealer who is the silent partner of the very slick Willy Loman, and Carol Dane is the shilling-a-dance dame with a heart of gold and misplaced faith in Martin.

Noir veteran John Harlow treats the audience to a few compelling showdowns and delivers an ending that provides even more justice than the Hays Code requires regarding the rule that crime must not be allowed to pay.

Anyone with questions or comments regarding "Crime" is encouraged to email me; you are also welcome to connect on Twitter via @tvdvdguy.