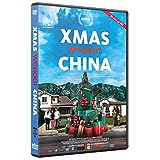 Distributor of "innovative and provocative" international documentaries Icarus Films literally and figuratively brings things home for the holidays with the December 8, 2015 DVD release of the 2103 U.S. documentary "Xmas Without China"  from environmentally-conscious media company Bullfrog Films.

The following YouTube clip of the "Xmas" trailer lays out the scheme around which the film revolves. It also nicely showcases entertainment that accompanies this education.


"Xmas" documents a stereotypical middle-class family (aptly named Jones) spending the month of December completely deprived of products from China while Chinese-American documentarian Tom Xia and his parents pursue the American dream of creating a Christmas yard display that can be seen from space. The charm of Xia comes through very early in the film in a scene in which he explains that he gave himself his Americanized first name directly from his love of "Tom and Jerry" cartoons.

The depth of the documented experiment extends well beyond illustrating the dependency of Americans on cheap goods from the titular nation and the validity of perceptions regarding those products; we also see the assimilation process of the Chinese-born parents of Tom as well as his cultural identity crisis. The Joneses having pet ducks who would end up on the Xia dinner table if that family raised them is a memorable example of the culture clash.

The Joneses soon discovering that the scope of items from the forbidden nation extends the playthings of their children to the family toaster and hair dryer. This clan further soon learns that China seemingly has a monopoly regarding manufacturing some types of products and that some products from other countries are prohibitively expensive. Examples include am absurdly expensive string of Christmas lights and a $100 stuffed animal.

Equally appropriately for the holidays, the audience does not learn much that it does not already know. At the same time, the aforementioned appeal of Tom and the cruel laughter as the Jones clan futilely attempts to lead normal lives without using any products from China provide awesome entertainment.

Anyone with questions or comments regarding "Xmas" is strongly encouraged to either email me or to connect on Twitter via @tvdvdguy.