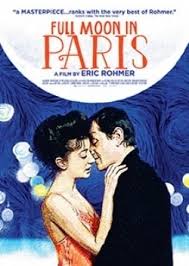 Film Movement Classics, which is the timeless movie division of fantastic foreign film distribution company Film Movement, serves up a tasty French treat in the form of a spectacularly remastered Blu-ray release of the 1984 Eric Rohmer film "Full Moon in Paris." The equally charming and somber elements of this tale of young interior designer Louise being torn between the Paris social life and her suburban-dwelling (and loving) boyfriend Remi evokes great thoughts of Audrey Hepburn films. The accolades for the film include a 1985 Best Film Award from the French Syndicate of Cinema Critics.

The following YouTube clip of the Classics trailer for the Blu-Ray release shows that that that promo. deserves an award of its own for accurately conveying the story and the style of the film while keeping spoilers to an absolute minimum.


The Blu-Ray enhancements are apparent throughout this beautifully shot film and are particularly amazing in a scene in which the every small detail of a drop cloth is crystal clear.

The timeless (and international) element comes in the form of Louise loving Remi enough to move into his suburban home but being unhappy regarding not regularly spending evenings in Paris and Remi wanting to leave early when they do venture into that metropolis. This dilemma prompts Louise to initially secretly retain her Paris apartment as a pied-a-terre. A particularly Hepburnesque element of this is a near obsession with not allowing anyone else in the apartment.

The Audrey Hepburn/New Wave vibe continues with the happening parties that Louise attends; the nusic is wonderfully bouncy, and dance partners change more often than the bet. Further, the title of "Moon" has terrific symbolic meaning.

The overall conflict in this retro-style drama escalates in the form of Octave, who is married with child, assertively trying to escape the friend zone regarding Louise. This relates to the separate schedules of Octave and his wife preventing them from spending much time together.

Louise ultimately fessing up regarding her self-love nest results in a surprisingly frank and civil conversation with Remi. The gist of this talk is that Remi does not have any cause for concern, and that Louise will let him know if things change. Things later becoming messy is predictable; many of the details regarding those developments is not.

For reasons that include "Moon" not being an American film, a Hollywood ending is not guaranteed (or expected). Like most great films from any country, the characters are wiser (but not necessarily happier) in the seconds before the closing credits roll. Also like all aforementioned great works of cinema, the audience can relate to the story and learn the same lessons as the characters.

The extra include an archive interview with Louise portrayor Pascale Ogier.

Anyone with questions or comments regarding "Moon" is strongly encouraged to either email me or to connect on Twitter via @tvdvdguy.