'Ophuls and Godard: the meeting in St-Gervais' DVD: Waiting for Godard Well Worth It 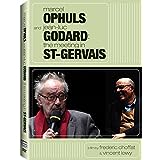 The recently released uber-awesome Icarus Films documentary "Marcel Ophuls and Jean-Luc Godard: the meeting  in St-Gervais" nicely complements the highly entertaining (and recently reviewed) Icarus documentary "Chantal Akerman: From Here." Both films come as close as possible to letting the audience into the minds of these three auteurs.

A small theater in Geneva is the setting for the dialog between Godard and Ophuls. The aptly passive moderator starts things by asking Godard about his experience watching the highly controversial 1969 Ophlus documentary "The Sorrow and the Pity." That film depicts the Vichy government of WWII-era France collaborating with the Germans.

This portion of "St-Gervais" prompts Godard to share his experiences related to his wartime fleeing from France to Switzerland as a young boy. The most delightful reminiscences regarding this journey consist of a charming act of defiance and discussing a relationship that triggers an interest in cinema in Godard.

The input of Ophuls regarding these topics include his own experiences as a German-born boy with a Jewish father and a non-Jewish mother. Ophuls also discusses silly objections to "Sorrow."

The contrasts between an identity as a French person and a Jewish person next prompts Godard to comment on those differences. This wonderful insight is one of a handful of comments that clearly show that Godard has an incredible love of language.

An especially amusing exchange centers around a failed effort by Ophuls and Godard to collaborate on a project. Much of the humor relates to the "wacky misunderstanding" regarding the nature of the project and the apparent obsession that Ophuls has for sending faxes.

The discussion regarding the current approach to film-making (especially in Hollywood) wonderfully parallels the thoughts of Akerman in her documentary. This commonality further makes one hope for a "sequel" that has all three filmmakers in the same room.

Godard aptly notes that movies have gone from being about making art to generating the highest possible profits. His observations regarding this include that a "lawyer" is now the one calling the shots. Related observations include references to the films of Max Ophuls, who is the father of Marcel.

At the same time, Godard makes a handful of witty comments regarding both his sense that he is no different from anyone else who is hired to do a job and that a "One Dollar Movie" is feasible.

The overall vibe that makes "Ophuls" so special is that these two men truly love their work and have great mutual respect and affection. It further is wonderful to have this record of these masters.

Anyone with questions or comments regarding "St-Gervais" is strongly encouraged to email me; you can also connect on Twitter via @tvdvdguy,