'Generation Baby Buster' DVD: Everything You Wanted to Know About Whether to Have a Baby but Were Afraid to Ask 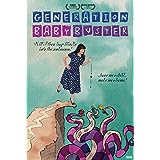 The Cinema Libre Studio documentary "Generation Baby Buster," which is coming out on DVD and VOD on June 9 2105, is equally entertaining and comprehensive regarding the debate on the pros and cons as to having a baby. The accolades for this film about the significant number of women who are not on board regarding travelling down the mommy track includes winning the award for best documentary at the Geneva Film Festival.

"Buster" truly should be required viewing for any woman and anyone in her life who would help raise her child who is trying to decide whether she wants to undergo the life giving step that is incredibly life altering.

The following clip, courtesy of YouTube, provides a good sense of the basis for the above statement.

Filmmaker/narrator Terra Renton approaches this topic from the perspective of a happily married 32 year-old woman who has pushed the pregnant pause button on her biological clock.

A personal experience highlights a primary theme of this film that seemingly has a cast of 1,000s of experts (including the New York journalist who incurred the wrath of the nation after writing about allowing her eight-year old solo on the subway) and just slightly fewer lay persons. A reunion at a boarding school that is ranked in the middle of the top 50 prep. schools in the country was depressing because literally every female classmate in attendance spent the entire time either chasing young children or negotiating with tween offspring.

Later commenting to my highly significant other, who shares my view that the best children are those of the feline and canine variety, that watching these women who excelled in high school and went onto prestigious universities waste their education and intelligence prompted the response "they're using their Wharton degrees to change diapers."

Renton spends a significant portion of the film addressing that trend in a more polite and detailed manner. The participants in the film compare some of the scads o' tangible aspects, such as the enormous investments of time and money, of child raising to the intangible benefits. One challenge regarding that is a childless person fully grasping the concept of a parent stating with complete sincerity that he or should would actually kill for a child.

The "Seinfeld" catch-phrase "you gotta see the baby" addresses a related issue that "Buster" discusses. Many parents of today get so wrapped up in their children that adult friendships typically either end or must actively involve the children.

The larger theme of "Buster" is that 21st century life creates what can be considered neo-natal considerations regarding whether to have a child. These factors include most parents of babies and young children no longer having support in the form of large numbers of relatives living in the same community (or perhaps under the same roof.) An additional consideration is the conflict between pursuing the self-fulfillment and of overall enjoyment of going out for drinks and similar adult-oriented activity and raising a child. One spoiler is that the experts recommend reducing the amount and openness of pleasure-giving vices.

The most amusing scene has an adorable couple discussing the history of their thoughts regarding whether to insert a bun in the oven; the wife declares their final decision only to have the clearly startled husband state that he guesses that that is what they are doing.

The bottom line is the Renton amazingly covers every base regarding her topic; it is almost guaranteed that anyone watching will have no trouble coming out one way or the other at the end of the film.

Anyone with questions or comments regarding "Buster" is welcome to either email me or to connect on Twitter via @tvdvdguy.