'Chantal Akerman, From Here' DVD: Inside the Director's Studio 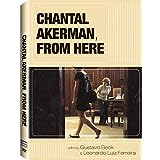 The fascinating and hilarious 2010 documentary "Chantal Akerman, From Here" is one of two recent intimate portraits of legendary filmmakers to come out on DVD from purveyor of genuinely "innovative and provocative documentary films" Icarus Films. The other one, which is titled "Marcel Ophuls and Jean-Luc Godard: The Meeting in St-Gervais," is slated for an early July 2015 review.

Akerman the person is an award-winning Belgian director whose filmography includes the 1996 film "A Couch in New York" and the 2006 feature "La-Bas." "Akerman" the film is an awesome hour-long single-take documentary shot through a doorway.

The camera is focused on Akerman, who answers questions that an unseen interviewer asks about film making and her life. The politely assertive nature of the outspoken personality of the subject provides a great deal of the aforementioned entertainment that is too good to spoil in this post beyond sharing that the lady really likes her cigarettes.

Suffice it to say that a badly received initial question that asks Akerman to broadly comment on film making gets things off to an interesting start. She is more receptive to queries regarding her work and the influences that shape it. She further has terrific comments regarding the general manner in which film making has changed over the past several decades.

These comments on transferring an artistic vision from an internal to an external include wonderful remarks regarding watching the work of influential directors. Cinephiles can relate to being blown away by exceptional work.

Akerman being both a maker of documentary and fictional films both gives her a broader prospective than her colleagues who limit their work to only one of those genres. This further gives the spellbound audience terrific insight into the differences in making these types of film.

The varied nature of the career of Akerman provides the additional treat of hearing her discuss a specific effort to make a commercially, rather than artistically, oriented film. A related topic is her use of imagery in her art.

On a broader (no pun intended) level, "Akerman" provides a delightfully digestible lecture on a dying art form by a master of that means of expression. The expression "They don't make 'em like that any more" is exceptionally true in this case.

Icarus further provides the gift of a 16-page booklet that features an essay on Akerman and her work. The author, Marion Schmid, is a French Literature and Film professor and a biographer of Akerman.

Anyone with questions or comments regarding "Chantal" is welcome to email me. You can also connect on Twitter via @tvdvdguy.