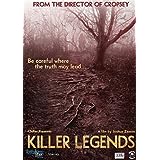 The documentary "Killer Legends," which Breaking Glass Pictures is releasing on DVD on July 1 2014, tells us everything that we want to know about urban legends but are terrified to ask. These include the tales of the maniac with the hook who targets teens on lovers' lanes, fatally tainted Halloween candy, psychos calling babysitters from inside the house, and child abducting bozos.

The following chill-inducing clip, courtesy of YouTube, of the trailer for "Legends" offers a good sense of the "its scary because its true" aspect of this documentary.

One particularly awesome aspect of this film is that it brings back nice memories of the first two seasons of the current proverbial long-running horror series "Supernatural." These early adventures focus on the dreamy Winchester boys investigating gory goings-on (including the "Everybody Loves a Clown" episode) that follow the pattern of the aforementioned urban legends.

Joshua Zeman, whose credits include the horror documentary "Cropsey," and his partner-in-film Rachel Mills take a refreshingly retro approach to their investigations of the truth behind campfire and schoolyard stories.

Rather than make themselves the main focus or primarily offer a video slideshow of talking heads, this two-person Scooby gang uses a wonderful melange of interviews with the aforementioned experts, archival news stories and similar materials, visits to the scenes of the crimes of which legends are made, and clips from classic horror film based on that lore. In other words, "Legends" clearly shows that Josh and Rach do their homework. Further, in true documentary style, any embellishment of the truth is minimal.

This segment of "Legends" tells the tale of the decades-old killing spree in Texarkana, Texas that inspires that folktale. The fact that the (never captured) perpetrator is known as "The Phantom" provides some sense of the authenticity of the related legend.

The look at the "The Candyman" legend related to the deception regarding identifying tiny pieces of  candy as "fun-size" extending to a psycho making those absurdly small morsels lethal is particularly disturbing. The circumstances regarding a real-life murderer who uses this technique should make even the strongest death penalty opponent want to personally fry this despicable individual.

The look at the basis for fearing clowns extends beyond actual cases of people being dressed as those characters while doing bad things to moppets to more basic reasons for crossing the street when seeing an Emmett Kelly wannabe approaching you. The interesting observations include that having clowns enter our homes through television transports these potentially creepy individuals from the outside world into our living rooms.

The plethora of extras on the DVD consists of special features that further discuss the legends that the film features.

The finding related to whether "Legends" is worth adding to your home-video library is yes. The subject appeals to the 12 year-old in all of us, and the manner in which Zeman and Mills present their research appeals to the Sundance/IFC/PBSophile in our current selves.

Anyone with questions or comments regarding "Legends" is welcome to email me. You can also connect on Twitter via @tvddguy.