'A Wife Alone' DVD: Hell Hath No Fury Like a Prostitute Scorned 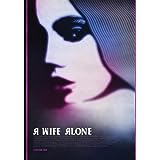 The well-produced 2012 psychological thriller "A Wife Alone," which is being released on DVD and VOD on June 17 2014, has the awesome vibe of indie films of this genre. These flicks show that making a good movie does not require big names in front of or behind the camera, elaborate scenes, a franchise, or multi-million-dollar pyrotechnics.

The following clip, courtesy of YouTube, of the trailer for "A Wife Alone" is spoiler free and provides an excellent sense of the overall noir vibe of the film. It shows that it is tailor-made for art-house showings.


The film opens with our heroine Jane fleeing after apparently committing a theft; the story then flashes forward several months to find her enjoying domestic bliss with mild-mannered Park, who has enough insecurity issues to fill a "very special" two-part "Dr. Phil" episode.

Ashley Springer, who has a history of bit parts in productions such as "Nurse Jackie" and "The Wolf of Wall Street," is perfectly cast as Park. His entire demeanor and skinny, pale, nearly hairless body indicate that he would not only hand over his lunch money without resistance but would stand in line to buy your meal with those funds.

The action kicks into high gear when the fairly newly married Jane and Park go to visit Steve and Holly, who are the godparents of Park. The extremely cruel and manipulative Steve is a role into which Kevin Spacey would have slipped incredibly comfortably. Sean Patrick Reilly of "Sleepers" and "Howl" does an awesome job with the part.

Steve is particularly skilled at manipulating Park for the fun and profit of the former. A disturbing early scene in Steve's pool excellently establishes their relationship.

Much of the drama relates to the artful unfolding of the history between Steve and Jane; the impact of this extends beyond this pair to the highly intertwined personal and business relationships between Steve and Park. Watching these surrogate daddy issues play out during a Father's Day viewing was very apt.

Watching the outwardly mild Holly dominate the otherwise dominant Steve provides further dark entertainment. This henpecking is so extreme that one is surprised to not see beak marks all over Steve's torso.

As is often the case, the woman calls the shots. Jane manipulates both Steve and Park regarding a scheme that ultimately both gets her everything that she wants and provides her intense satisfaction in the process. Holly experiencing collateral damage does not prompt an iota of concern.

A particularly compelling aspect of all this is that it largely is very plausible. Steve is not unlike the huge population of men (and women) who do not hesitate to horribly abuse people to achieve a desired goal; Jane is merely a caricature of a strong woman with both a sense of justice and a cold heart regarding kind folks who can help her achieve her goal, and Park is the nice guy down the street who is prone to abuse by folks who prey on that kindness.

Everything conveyed above make "Wife" a great choice for an evening in which your taste runs more to "Midnight in the Garden of Good and Evil" than "Neighbors."

Anyone with questions or comments regarding "Wife" is encouraged to email me. You can also connect on Twitter via @tvdvdguy.