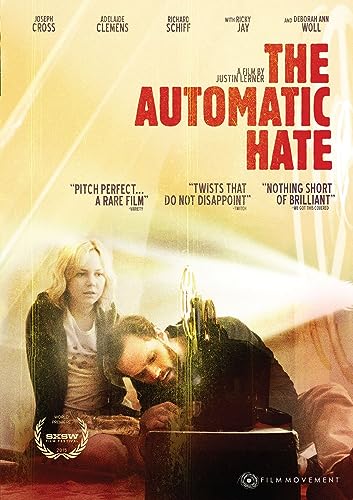 The September 13, 2106 Film Movement DVD release of the 2015 drama "The Automatic Hate" proves (along with the other Unreal TV reviewed Movement September 2016 DVD releases of U.S. films) that the state of domestic cinema is far less dire than the offerings at the local multiplex suggest. Movement releasing "Hate" on the same day as the similar themed and styled and equal in quality (Unreal TV reviewed) "Take Me to the River" further validates that properly portrayed family dysfunction can provide exceptional fodder for a movie.

"Hate" premiering at the 2015 SXSW Film Festival shows that these forums have not entirely abandoned their roots and merely become a showcase for the aforementioned lamestream productions. This film not winning any festival awards illustrates that genius sometimes is denied its due.

Joseph Cross, a veteran of several series that include his hilarious and apt role as a bickering sibling/high school jock on the Comedy Central show "Strangers With Candy" that mines humor from dysfunction, stars as chef Davis Green. Davis immediately comes across as sympathetic in the opening scene that has him trying to soothe hysterical live-in girlfriend Cassie but being careful to not push hard.

Attractive, affectionate, and pushy blonde Alexis unexpectedly showing up at the door of Davis and Cassie during this period does not help matters. Alexis further stirs up things by asserting that she is the previously unknown cousin of Davis and that she wants to know the basis of the decades-long estrangement of her father Joshua (whom magician/grifter/David Mamet BFF Ricky Jay plays very well) and Davis sire Dr. Ronald Green. Richard Schiff of "The West Wing" and more than 100 other roles does equally as Ronald.

Intrigued Boston resident Davis digs a little deeper and soon decides to travel to the small upstate New York town where his newly discovered relatives live. What he discovers about about their lifestyle and his family history further intrigues him and amps up the drama. Humor comes in the form of the two sisters of Alexis being just as quirky as her and Joshua being very blunt in true Jay style. Symbolism comes in forms such as these kinfolk having an address of 411.

A tragedy that occurs early in the visit of Davis brings both Ronald and Cassie into the mix. This pair and the Joshua branch of the Green family tree learning of a more recent scandal intensifies the still simmering resentment between the brothers and strains the already troubled Cassie and Davis relationship. This incident, as well as a triggering event in "River," further shows the disturbing trend of family dynamics passing from one generation to the next.

The sad because its true element in both "River" and "Hate," which would make for a terrific double feature, is that they are not unduly exaggerated depictions of what can happen in the best (and worst) of families. Siblings often have widely differing personalities and values; almost inevitable feelings that parents favor the other one add fuel to this fire. Indications that the offspring of these brothers and sisters are repeating the pattern is an almost sure way for the past to rear its very ugly head.

The apt bonus short film that Movement includes this time is the 15-minute U.K. movie "Patriot." This one has the young daughter of an English family that is very proud of both its clan and area meet a gypsy boy when she runs off. The ensuing cultural clash prompts predictable drama and some that is unpredictable.

Anyone with questions or comments regarding "Hate" or "River" is strongly encouraged to email me; you can also connect on Twitter via @tvdvdguy.