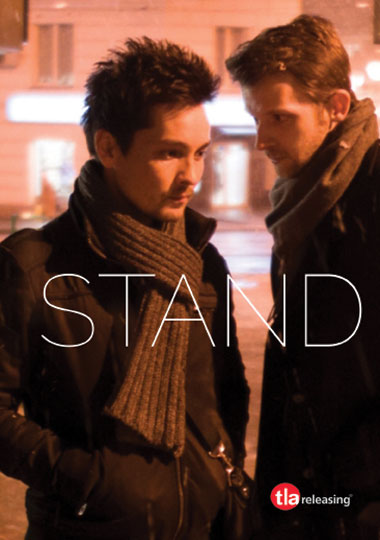 The informal DVD of the month club that tla releasing, which is the international/independent movie division of LGBT film giant tla video, operates both shows the potential of queer cinema and supports the theory that other countries do a better job than Hollywood with all genres. The 2014 film set in Moscow (and secretly filmed in Ukraine)  "Stand," which is coming out (pun intended) on August 4 2015, enhances the respect for releasing that picked up traction with the recently reviewed "Boys in Brazil." In this respect, releasing is the younger gay cousin of Unreal TV international DVD distributor fave Film Movement.

The strong impact of "Stand" includes the real-life events on which this film about a 20-something gay man taking a stand against physically and emotionally brutal attacks is based. The largely realistic depictions of virtually every aspect of the film further contribute to this vibe.

The film is equally awesome regarding how it depicts central gay couple Vlad and Anton. (Yes, Vlad is "the impaler" in the relationship.) Each man in this wonderfully committed live-in relationship is attractive in an everyday (rather than doe-eyed twink) manner, is neither annoyingly flamboyant nor fiercely nasty, is very likable, and does a good job communicating their mutual love. Further, they have a group of equally affable friends with whom they are fully out of the closet. This portrayal is particularly nice in the oppressive setting of Russia.

Like many dramas from around the world, "Stand" begins with a random encounter that greatly changes the lives of the main characters. In this case, Vlad taking what may or may not be an accidental detour while driving with Anton results in them coming across an off-screen group of men savagely beating a gay man. Anton speeding off on the attackers turning their attention to him and his significant other abruptly ends a debate regarding whether they should help the victim.

Anton pursuing an investigation of the men who mercilessly torment and savagely beat other men merely based on the sexual orientation of those victims creates the danger of joining the ranks of the victims. This, in turn, jeopardizes his relationship with Vlad.

The level of tension between the couple escalates in proportion with the degree of danger in which Anton places himself in the course of his campaign to help ensure that the attackers are held accountable for their crimes. An especially harrowing scene involves Vlad losing contact with Anton while the latter is with a suspect.

The aforementioned repressive environment in Moscow makes Anton that much more of a hero. Just being a gay man (let alone having a live-in relationship with another man) makes him vulnerable to official and unofficial abuse. Making himself highly visible almost ensures that he will suffer serious pain on top of the strife that he and Vlad are experiencing.

"Stand" further stands (no pun intended) apart from both mainstream and gay thrillers by maintaining a proper tone throughout the film and by not promising a Hollywood ending. This realism further extends to a strong element of ambiguity that literally continues until the final second of the film.

As discussed above, all of this amounts to a film in which two central characters must decide the extent to which they are willing to take the titular position.

Anyone with questions or comments regarding "Stand" is encouraged to email me. You can also connect on Twitter via @tvdvdguy.