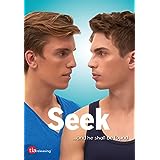 The 2014 Canadian gay romdram "Seek," which is a recent addition to the tla releasing DVD catalog, is a nice example of the type of movie that this international film division of gay-themed media company tla video offers. The globally relatable story this time centers around up-and-coming (truly no pun intended) 20-something writer Evan pursuing personal and professional fulfillment (again, no pun intended.)


Evan may not be Mr. Right, but is much more than Mr. Right Now. He is nice-looking, personable, reasonable intelligent and talented, shy without being wimpy, hits the gym regularly, and works hard. His job at a (presumably weekly and presumably free) gay magazine writing on topics such as the leather scene pays the rent of this boy. His aspirations include writing for a larger and more mainstream publication.

The aforementioned ambition of this blond gets him a freelance assignment writing a profile on successful party planner Hunter and the people in the orbit of that former flyer boy turned club kid.  Lounging on a couch and eating leftovers while watching Evan explore this world with a specific mission to inform folks who commute back to the suburbs right after work and are asleep while the events about which he writes helps that portion of the message of "Seek" hit home.

Much of this cute and entertaining film has country mouse Evan interviewing quirky folks for both his day and night jobs. These include a gay couple whose intimate activities revolve around a sports gear fetish, a straight couple in which the 100-percent straight man enjoys cross-dressing, and a pair of outrageous drag queens who sandwich Evan between them.

Meanwhile, Evan experiences real and fantasized encounters in his parallel quest for a meaningful relationship. For better or worse, this never rises (once more, no pun intended) beyond an "R" level. Gay men who have been on either (or both) sides of interaction between Evan and a man with roughly 20 years on him who wants to be "friends" can relate to Evan trying to be polite and the other man either being unable or unwilling to read the situation. On a broader level, this reflects the challenge of gay relations related to a general desire to be with someone younger and cuter than you. (For the record, even the slight straying into "Sex and the City" territory regarding the above observation caused slight nausea.)

"Seek" further explores the extent to which Hunter and Evan will connect beyond collaborating on the article regarding the business of pleasure. Suffice it to say, the film delivers with one set of unexpected developments and another equally satisfying climax (pun intended this time).

Anyone with questions or comments regarding "Seek" is encouraged to email me (with the understanding that I am very happily spoken for). You can also connect on Twitter via @tvdvdguy.