'When the Boat Comes In' S1 DVD: Great Series On Not So Great Aftermath to The Great War 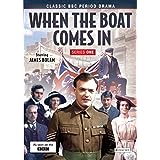 BFS Entertainment, which superbly makes British films and television shows available in North America, continues its fine tradition in releasing the 1976 first series (my people call them seasons) of the BBC drama "When the Boat Comes In"  on DVD.


This program centers around the trials and tribulations that newly discharged soldier Jack Ford and the Seaton family experience in the years following the end of the Great War (a.k.a. World War I). This drama occurs in their Northern England shipbuilding and mining community of Tyneside.


The severe and long-term economic depression that plagues England during the 1920s is at the center of much of trauma that Ford and his adopted family face. The effects of those tough times include a miner's strike that deprives father Bill Seaton of his livelihood, high unemployment that prompts Jack to seek dodgy contract work, and dismal prospects for even the brightest and most talented of the young students in the class of daughter Jessie.

Additional drama comes in the form of younger Seaton brother  Billy facing harsh snobbery and financial challenges regarding his efforts to obtain higher education and ultimately becoming a doctor.

The pilot episode shows great enlightenment for both the 1920s and 1976. Jack meeting elder brother Tom Ford, Tom's fiancee Mary, and Jessie early in the episode leads to a friendship with Tom and potential romance with Jessie.

The aforementioned friendship with Tom leads to inviting Jack to Tom's impending wedding. The drama associated with this relates to speculation regarding the sexual orientation of Mary's brother, who served in the Army with Jack.

Jack handles the matter very well and expresses a modern attitude regarding the matter without causing Mary any of the anticipated shame associated with her brother.

Other drama in the pilot relates to a young former soldier whose WWI style post-traumatic-stress-disorder is not being properly treated. The tragedies associated with this neglect provide good social commentary that is as relevant in 2014 as the message regarding sexual orientation.

The well-depicted human misery that occurs during the ensuing 12 S1 episodes include the sudden death of the mother of a pre-adolescent boy, an unplanned pregnancy with a link to another woman saving herself, the death of a primary cast member, unrealized opportunities for financial security, ended and new romances, and accidents that highlight the dangers of working in the mines.

The aptly named episode "King for a Day" has Jack posing as a gentleman to facilitate a strawman purchase of a manor on behalf of his temporary employer. The bad behavior and selfishness by the gentry among whom Jack finds himself provides both wonderful comic behavior and a nice break from the darker world of the Seatons.

An episode that primarily occurs during a New Year's Eve is also notable both for consisting of a series of vignettes depicting the various activities of Jack and the Seatons. A party that literally has guests singing for their supper offers a look at the popular music of the day, the contrasts between simultaneous meetings of Tory Party women and socialist men are also entertaining, and seeing the gang try to get a grumpy Bill to lighten up provides further entertainment.

The S1 finale episode continues the nice pacing of the other episodes and nicely ties in the miners' strike and several other elements from earlier episodes. It additionally leaves the DVD audience eagerly anticipating the BFS DVD release of S2, which most likely will come in January or February 2015.

The conclusion regarding all this is that not many television programs capture the mood and style of an era as consistently and candidly as "Boat." These episodes further validate the theory that British television generally is superior to the video fare that is produced on this side of the pond.

Anyone with questions or comments regarding "Boat" is welcome to email me or to connect on Twitter via @tvdvdguy.