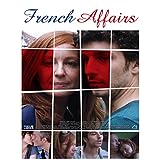 The 2013 French romantic drama "French Affairs," which uber-fantastic foreign and/or art house film distributor Cinema Libre is releasing on DVD on December 9 2014, genuinely harkens back to French cine of a few decades ago.

The following clip, courtesy of YouTube, of a wisely selected scene from "Affairs" offers a nice look at the "Frenchness" of the production.


The very Gallic relationship around which "Affairs" centers is the doctor-patient interaction between Astrid the therapist and the prostitute-turned-travel agent Celine. Celine is seeking help with past and present relationship issues, and single-mother Astrid is struggling to deal with the angst that her teenage son David is experiencing. Astrid further is seeking to enjoy a full personal life in the face of David despising every man whom she dates.

The fourth member of the quartet that ultimately forms intersecting triangles is travel agency owner/Celine life partner Olivier. A chance meeting between Astrid and Olivier develops into an affair about which David (but not Celine) is aware.

David inadvertently contacting Celine in conjunction with planning a trip about which Astrid is unaware puts that travel agent in contact with the troubled youth about whom she has heard a great deal from her therapist. The apparently mutual desire for the friendship that Celine and David develop to become sexual adds to both the Frenchness and the drama of the film.

Related ambiguity exists regarding whether Astrid and Olivier are running off for a week together further contributes to the intrigue.

A more international element comes in the form of Olivier alternatively trying to be David's friend and to exert paternal power that he lacks regarding getting that lad to show Astrid more respect. Just about anyone who has been on either side of such a significant other/child of divorce relationship can relate to the interaction between David and Olivier; Olivier goes as far as using the tried but flawed method of referring to David as "buddy."

The Olivier/David dynamic coming to a head in a scene in David's bedroom during a larger climatic sequence in "Affairs" is especially realistic.

International feminist themes include the degree to which a woman should make sacrifices to allow a man to "rescue" her, the aforementioned conflict between being a mother and  a woman, and the desire to pursue romantic relationships with proven cads or otherwise unavailable men.

Rather than being lost in translation, the aforementioned themes tell entertaining and related stories that may get you thinking about your own relationships.

Anyone with questions or comments regarding "Affairs" is encouraged to email me; you can also connect on Twitter via @tvdvdguy.