'the leftovers' S3: BD: Saving the Best Remnants for Last 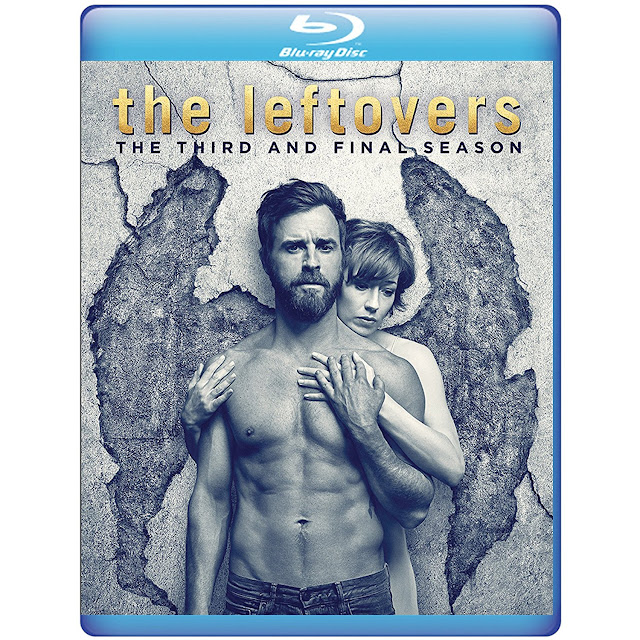 The Warner Archive October 10, 2017 DVD and Blu-ray releases of the third (and final) season of the HBO drama 'the leftovers' verifies that producer/author Tom Perrotta and his "Lost" partner-in-production Damon Lindelof conceive each season in this exceptional series as a third of a trilogy. The S1 review summarizes the lore of this series that centers around the sudden departure of 2-percent of the population of Earth on October 14, 2011; the post on S2 discusses how the characters respond to a riot at the end of S1.

The trilogy pattern of "leftovers" begins with S1 being adequately compelling to draw in fans, S2 being interesting but still the weakest entry, and S3 providing big payoffs in terms of story and closure. One can only hope that Warner and HBO heed the lesson regarding not extending a franchise beyond a third entry.

Like S2, S3 opens oddly but soon makes sense. This episode further establishes the S3 pattern of montages set to an eclectic mix of music. These early scenes depict a group of 19th century Puritans anticipating a repeatedly delayed rapture.

The action then shifts back to Miracle (nee Jardeen), Texas where our leads call home. Peace is restored and reforms are in place in the wake of the conflict at the end of S2. Once and current police chief Kevin Garvey (Justin Theroux) is keeping the peace with (reformed) now 25 year-old stepson Tom. The aforementioned final entry payoffs include the story of how Kevin and Tom's mother Laurie (Amy Brenneman) somehow form a family.

Although Kevin and significant other/federal agent Nora Durst are still together, many other characters are in new (sometimes unlikely) friendships.

This season centers around a Biblical prophecy that predicts that the titular rejects will join the suddenly departed on the impending date of October 14, 2018. The significance of this date is that it is the seven-year anniversary of the central dramatic population contraction.

Minister/Nora sibling Matt Jamison stirs things up with his personal gospel that identifies the seemingly multiply resurrected Kevin as the messiah whom Matt and other believers want to accept the mission of preventing the upcoming end of days. Conflict regarding this is that Kevin does not believe that hype.

The most entertaining story arc revolves around Nora; she pursues an offer to undergo a process that reunites "leftovers" with loved ones who are two-percenters. Symbolism enters the picture in the form of Nora losing her husband and two children in the first culling and '80s sitcom "Perfect Strangers" star Mark Linn-Baker advocating the reunion procedure after being the only one of the three "Strangers" stars to not depart in the first wave. It is predicted that Linn-Baker and co-star Bronson Pinchot will do the dance of joy if reunited.

The homage to the work of Lindelof on "Lost" extends beyond the copious symbolism, heavy use of music, and regular temporal shifts in narration to have the main characters travel to Australia for reasons that include saving the world; this includes a necessary procedure (which involves the most hilarious moment in the series) in a fortified underground bunker. One difference is that Jack Shephard saving the world never requires that he whip it out.

Perrotta nicely puts his creativity to use in building the action to a perfect series finale; it keeps us guessing to near the end and follows the example of "The Sopranos" and "Cheers" of providing a sense of life (in some form) continuing.

Anyone with questions or comments regarding "leftovers" is strongly encouraged to email me; you alternatively can connect on Twitter via @tvdvdguy.