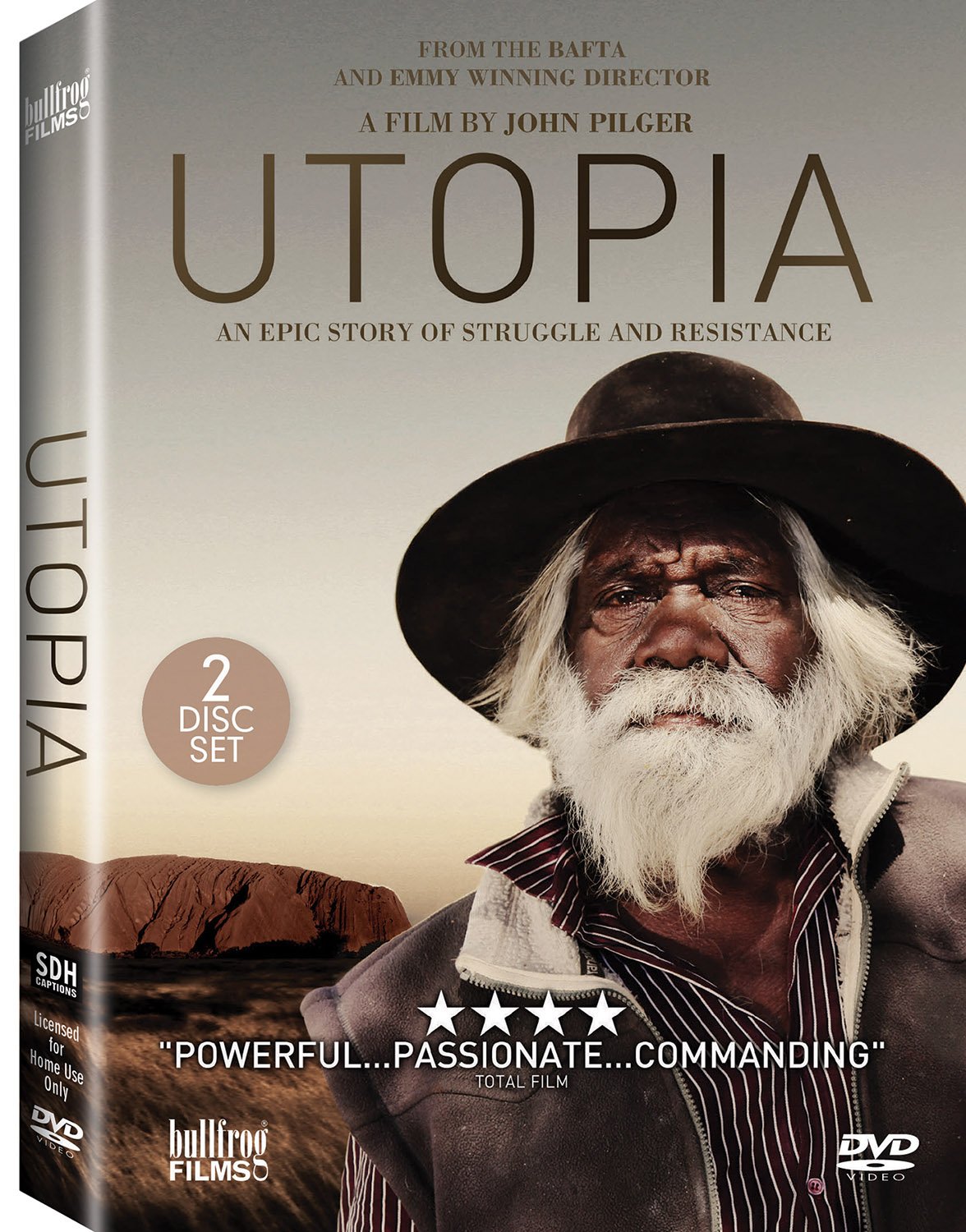 The February 28, 2017 DVD release of the 2013 film "Utopia" by documentarian John Pilger is the latest example of documentary film company Bullfrog Films and documentary film distributor Icarus Films making a truly dynamic duo. This study of the horrendous manner in which the Australian government consistently treats the native Aborigines of that country hits home hard due to those practices closely mirroring the treatment of native Americans and black people in the United States.

The parallels are close right from the opening scenes that depict white Australian police officers viciously mistreating black people in their custody without those law-enforcement officials receiving any punishment. The similarities between that country and ours continue with Pilger shifting his focus to the gorgeous coast and reporting on the Grand Canyon size income gap between wealthy white Australians and the black Aborigines. This segment includes a report on a government plan to wipe out the population of the latter.

The title of "Utopia" is commentary on the British using that term for the region of Australia in which Aborigines live that only the most perverse of us would wish on even our worst enemies. The impact of this includes that region being the focus of a campaign that is directly comparable to the U.S. government wiping out a great deal of the native American population and confining the survivors and their descendants on poverty-stricken reservations.

Pilger vividly documents the theme that the "haves" in Australia enjoy one of the highest standards of life in the world while even the "have nots" with the highest living standard among that group endure conditions that are comparable to the slaves quarters of 19th century America. The copious vivid illustrations of this include a tour of a relatively pricey resort that is a renovated holding facility for Aboriginal people. This visit proves its point in segments that include the lack of acknowledgement of a burial ground through which the resort has a road.


Pilger seems reasonable in placing most of the blame on the national government of Australia. His interview with Minister of Indigenous Health Warren Snowdon has particular impact in that Snowdon is very defensive and unduly loses his cool with Pilger.

In the interest of fairness, Pilger seems unfairly hard on a top official of the prison system who remains the head of that system after an incident in which a black prisoner essentially cooks to death while confined in an a literally roasting hot van for several hours. The official, who obviously lacks direct involvement in the incident, is very regretful and seems sincere in asserting that an acted-on desire to implement reform is a factor in deciding to stay on the job.

Pilger continues to harangue the prison official after hearing her reasoning, and he disregards her equally apparently valid thinking regarding an incremental approach toward changing the thinking of prison guards who are the product of a society that actively supports brutally mistreating black people.

Additional impact comes ala Pilger documenting how things have not improved during the decades in which he has been addressing the plight of Aborigines.

Another sub-topic is a propaganda campaign that is bad enough because it centers around false claims of rampant organized pedophile activity and additional gross misconduct in Aboriginal communities. The equally reprehensible profit motive behind this effort makes the story even more sickening.

Pilger further shines a spotlight on the "stolen generation" of Aboriginal children snatched up and given to white families. The history repeating itself aspect of the story enhances the "ick" factor.

An included booklet in which Pilger expert Anthony Hayward provides a Cliff Notes-style summary of "Utopia" and of the extensive efforts of Pilger to alert the world to the dark side of the Outback is well-worth reading. This booklet further provides mini-biographies of the copious talking heads who participate in the extended interviews on the second disc in the release.

Ending this review with the observation that "Utopia" will make you look at Australia with a much more critical eye than you currently do shows that Pilger achieves his objective without resorting to sensationalism.

Anyone with questions or comments regarding "Utopia" is encouraged to email me. You also can connect on Twitter via @tvdvdguy.