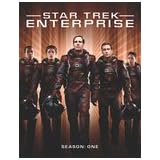 One aspect of the 2001-02 S1 of the sci-fi series "Star Trek: Enterprise" (nee "Enterprise") that makes a New Year's Day review of the CBS Home Entertainment Blu-ray release of these episodes (and the usual trektacular extras in the BD releases of franchise series) apt is that this prequel show returns the audience to the virtual birth of the "Trek" world  much better than the film "The Phantom Menace" tries to regarding the "Star Wars" universe.

A more personal aspect of the theme of beginnings is that this set marks the beginning of the Year of Trek for Unreal TV. A recent bonanza of "Trek" BD sets is facilitating reviews of all four seasons of "Enterprise" and three of the four "Star Trek: The Next Generation" BD sets that have not made their way into the Unreal TV video library. A recent review has shared thoughts on the particularly awesome S7 TNG BD set.

The following clip, courtesy of YouTube and CBS, of the brilliant in every sense trailer for the S1 BD set of "Enterprise" awesomely touches on the lore, extras, season highlights, and incredible technical enhancements of this "stunning Blu-ray hi-definition" release.

The timeframe of "Enterprise" is roughly halfway between the events depicted in the theatrical film "Star Trek: First Contact," which involves the efforts of humans to take the step in space exploration that ultimately leads to the adventures of the "Trek" series and films, and the original "Trek" series (OS) starring William Shatner.

The pilot (no pun intended) episode "Broken Bow" of "Enterprise" strikes the desired balance between exposition and getting down to the action regarding any first outing for a series. The episode opens with a Klingon running through a cornfield and leads to Captain Jonathan (a.k.a. Admiral Johnny Archer) Archer and his intrepid crew taking the not-quite-ready titular spaceship on its inaugural mission.


Sci-fi favorite from his "Quantum Leap" days Scott Bakula does a great job portraying Archer as easily the most likable of the five primary "Trek" captains. He also has the best wit and arguably is the most clever of the lot despite not likely being the most intelligent or best educated.

This first trek is to give said Klingon a ride back to the Klingon home world of Kronos. Although this race is well known to both Enterprise crews and "Trek" fans as early as the OS, "Bow" represents the first encounter (i.e. contact) between humans and the aforementioned warrior race.

Other notable races that make their first appearances as measured by the chronology of "Trek" lore in "Enterprise" S1 include the Andorians, Ferengis, and Nausicans.

The wonderfully symbolic parent-child relationship between the humans and the more advanced Vulcans literally provides hours in "Enterprise" S1. Right from the start, the Vulcans oppose humans traveling into deep space before the Vulcans feel that the good folks at Starfleet are ready to take that particular one large leap for mankind.

For their part, the upstart humans (and Archer particularly) are resentful that their "parents" are trying to prevent them from exercising what they consider to be rights that they feel that being respectful, polite, and responsible has earned them.

The resident Vulcan on "Enterprise" is science officer T'Pol, who is a mix between Spock of the OS and the more sultry cat-suit clad Seven of Nine of "Star Trek: Voyager." Watching her physical and emotional pain regarding serving on a ship of smelly and "lesser" humans is as entertaining as watching her both become more accustomed to her crew mates and coming to better value the human perspective.

The aptly titled episode "Acquisition" involving the aforementioned savagely and ruthlessly capitalistic Ferengi also includes one of the best scenes with T'Pol, who introduces the disabling Vulcan neck pinch to the "Trek" universe in this one. This stoic and emotion-repressing character also gets playful with Archer regarding disparaging remarks that he made about her earlier in that offering. A very game Archer plays along.

Other Vulcan themes enter "Enterprise" in episodes such as "Fusion" in which our heroes encounter Vulcans who choose to not repress their emotions. This episode introduces the concept of the Vulcan mind meld.

A scene in an "Enterprise" episode in which a crew member asks a Vulcan if members of that race dance is a wonderful nod to a line from the predecessor series "Voyager" in which resident Vulcan on that program Tuvok states that "Vulcan's don't dance." (That line and fellow "Voyager" statement "fun will now commence" work their way into personal conversations at least once a month.)

Another "Trek" element that "Enterprise" introduces from the perspective of the chronology of the franchise lore include the (oft-violated) Prime Directive that prohibits interfering with the affairs of a planet. Additionally, seeing the "Enterprise" gang fear the then-new technology of transporters is funny until someone loses a beagle.

Having Bakula "Leap" co-star Dean Stockwell appear in the episode titled "Detained" is a nice treat. These former co-stars are not allies in this offering in which Stockwell's character runs an interment camp.

On a broader level, the "Enterprise" cast seems to both enjoy itself and each other even more than the seemingly very compatible "Next Generation" group. One scene in particular has Bakula trying very hard to stop from bursting out laughing regarding the pregnancy of chief engineer "Trip" Tucker, played by later "Stargate: Atlantis" semi-regular Connor Trinneer. This bonding and overall enthusiastic tone is a perfect match for this show about these genuine pioneers.

"Atlantis" era Trinner further deserves a shout out for separately encountering Wraiths and getting caught up in webbing in "Enterprise."

On an additionally broad level, seeing this visually impressive series depict the earliest stages of the space exploration around which "Trek" largely centers is fascinating and makes especially good use of the Blu-ray format. An example is critics at the time comparing the Enterprise NX-01 in this series with a submarine and the Enterprise of the current feature-film franchise being called an Apple Store in space.

The always Trektacular (and numerous) special features this time include interviews with series co-creators (and "Trek" gods) Rick Berman and Brannon Braga), documentaries on season-long story elements, and "making of " features.

All of this amounts to a fanboy dream in the sense of getting to see how "Trek" begins from the perspective of already having seen four live-action and one animated series and ten feature films. The folks behind the scenes and in front of the camera do more than do "Trek" creator Gene Roddenberry proud.

Anyone with questions regarding "Enterprise" or anything else "Trek" is strongly encouraged to email me. You can also connect on Twitter via @tvdvdguy.