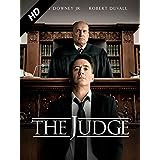 The Blu-Ray combo. pack of the Oscar-nominated 2014 film "The Judge" that Warner Bros. Home Entertainment is making available through the WBShop and the other usual suspects on January 27, 2015 includes Blu-ray and DVD versions of the film as well as a code for a digital HD version. The accolades for this legal/family drama includes an best supporting actor Oscar Nomination for Hollywood royalty Robert Duvall.

This film is also notable for casting Robert "Iron Man"  Downey, Jr. in a role that does not have him playing either an exceptionally quirky goofball or a lead in a summer blockbuster. In this respect, "Judge" seems to be one that is made for Downey in exchange for the higher profile films that he makes to add another cash cow to the studio herd. It further provides a look at a more mature and mellowed Downey.

The following clip, courtesy of YouTube, of a trailer for "Judge" provides an exceptionally good sense of the film and the terrific jobs  by Downey and Duvall.


Although "Judge" is chock full of cliches and stereotypes, it works because they are done well. The simple truth is that these familiar concepts achieve this status because they have elements of truth.

Downey's Hank Palmer starts out as a somewhat watered down version of a typical Downey character. He is an arrogant high-powered big-city defense attorney who does not hesitate to literally pee on the prosecutor. At the same time, Hank does not engage in outrageous courtroom antics.

Hank is also an escapee from both the small Indiana town where he grew up and from father Joseph Palmer. Joseph, played by Duvall, is the titular adjudicator.

The apt leisurely pace in this film about small-town and family drama is conducive to the reveals that ultimately tell the complete tale of the conflict that prompts young Metallica fan Hank to abruptly leave family and friends behind to lead the life that brings him to the point of being a highly skill legal shark.

The cliched family tragedy that brings Hank home after a couple of decades away is the death of his mother. This plot point provides a good character development device.

The filmmakers do not disappoint regarding expectations of shots of an unhappy Hank sitting on a plane and then driving past fields and rural road signs before hitting a textbook Main Street on his way home to attend the funeral of his mother.

Hank predictably hightails it back to the big city ASAP after laying his mother to rest but returns almost as quickly on learning that Joseph is charged with a murder regarding a death on the night of the funeral. The fact that the dead man is a defendant regarding whom Joseph ill-advisedly shows leniency many years earlier complicates the matter.

It is equally interesting that the circumstances regarding the death that provides the basis of the criminal charges against Joseph relate to a literal first day lesson in an introductory criminal law class. The professor presents the scene that one person shots another and then asks the law students if the person who fires the gun is guilty of murder. The spoiler is that the correct response is "it depends."

Comic relief in "Judge" comes in the form of the amusing Dax Shepard playing local attorney C.P. Kennedy, whom Joseph initially hires to defend him. The quirks of the Pylesque Kennedy include vomiting due to nerves outside the courthouse each day of the trial.

The cliches end with Hank discovering highly relevant information related to the mental state of Joseph at the time that the car that he is driving collides with the bicycle that the soon-to-be-deceased man is driving. Understandable pride on the part of Joseph creates conflict with Hank, who would rather see his father (or any other client) validly set free than have him unnecessarily sacrifice his freedom to preserve his reputation.

The final scene returns us to predictable cliche territory but is well presented nonetheless. The impulse to comment that we see a stark difference in Downey by this point is to strong to resist.

The final arguments regarding the merits of "Judge" are that the entire cast (which includes numerous household names) does a nice job, the film presents universal truths about family to which most of us can relate, and the filmmakers nicely execute this effort to blend courtroom and living room drama. Additionally, the charm and arrogance of Downey contribute oodles of nice humor.

"Judge" additionally sends an awesome message that a multi-plex success can attract both top-notch stars and the general public without resorting to raunchy dialogue or costly pyrotechnics and cutting edge effects.

The extras include extensive interviews with Downey, Duvall, and other folks both in front of and behind the camera.

Anyone with questions or comments regarding "Judge" is encouraged to either email me or connect on Twitter via @tvdvdguy.