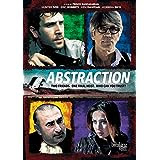 Philadelphia-based Breaking Glass Pictures continues branching out from offering gay-themed DVD releases that run more toward the sublime than the ridiculous in making the independent 2013 drama "Abstraction" available on January 27, 2015.

The following clip, courtesy of YouTube, of the trailer for "Abstraction" provides a good sense of the drama and intense moments of this film festivals hit.

The gritty look and tone of the film is perfect for this wonderfully dystopian tale for our times. The film begins with our heroes Tommy and Gary augmenting their meager incomes from dead-end jobs by pulling heists for a local small-time crime boss. The latest caper for this employer going horribly awry strongly impacts both our stereotypically small-town losers and their freelance employment.

Tommy particularly is feeling beleagured when aptly named new girlfriend Scarlet presents an opportunity to pull off the stereotypically one last big job. The drama commences with Tommy recruiting Gary to help him with the caper.

The "so easy it can't fail" crime involves stealing a $500,000 painting from an art dealer. Needless to say, things do not go as planned.

Once the boys accomplish this task, they face several other obstacles that prove the theory about comedy that something that is tragic when it happens to you is hilarious when someone else is the victim.

We ultimately learn that the boys are pawns in a larger and slightly more elaborate scheme with a motive that extends beyond monetary gain. The cynical aspects that no one is innocent or trustworthy that this adds to the film provides terrific commentary on our adversarial times.

The success regarding this effort is due to the focus on keeping it realistic while avoid all the traps that would make it look like a reality show.

Anyone with questions or comments regarding "Abstraction" is welcome to either email me or connect on Twitter via @tvdvdguy.